Rose Chan Has to Buy Cheap Food Without an Income 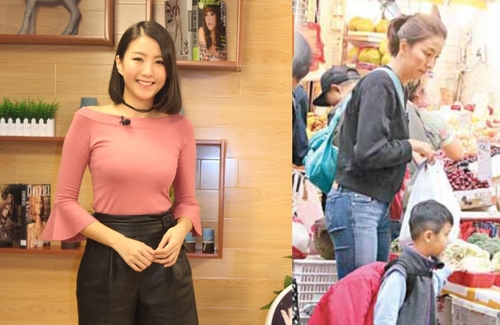 In the past year, goddess Rose Chan (陳嘉桓) has been pitted against new challenges due to contract issues with her management company. The 26-year-old’s workload greatly reduced, leaving her with barely any income for at least a year, forcing her to rely on herself to get jobs here and there, mainly depending on her savings to get by while staying frugal.

Earlier, she was seen waiting in front of a school entrance to pick up her three-year-old brother. During that period, she talked with the other students’ parents happily. When her brother came out, she fed him some snacks before heading to the market together, where Rose was busy running around looking for the best deals before deciding on a piece of pork and some cauliflower.

Then, holding her brother’s hand, they went to the fish market where she was spotted inspecting the freshness of some fish priced at $20 HKD. Afterward, she picked up a shrimp to show her brother and threw it back into the water when it began to struggle. A seller at one of the stalls saw Rose and yelled to another seller asking if the siblings were Jordan Chan’s (陈小春) wife and son, complimenting her looks. Embarrassed for being mistaken as Cherie Ying (应采儿), Rose left hurriedly to meet up with her mom. Rose handed the food over to her before taking her brother to the park to play for half an hour. They were seen playing on the slides together, showcasing a great relationship. Although she is out of work, Rose is gaining precious time to spend with her family.

However, during the height of her career, Rose had an impressive monthly income of 200,000 HKD, as she was very popular with customers for her 42-inch-long legs and cashew shaped eyes along with her sweet smile. She is often invited to be the spokesperson for many brands on top of filming movies.

Unfortunately, her career seems to be put on hold after contract issues arose with her management company. Both parties are still working on the contract terms, thus, the last time she received a job through her company was last year’s Mainland web drama. Her recent stint on Shaw Brothers’ online drama, Guardian Angel <守護神之保險調查>, was a job she landed herself.