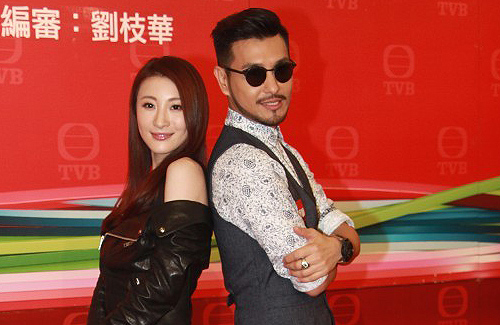 Attending the blessing ceremony for his new drama Hot Pursuit <乘勝狙擊>, Ruco Chan (陳展鵬) appeared with a refreshing change in his image. Playing a swindler in the series, Ruco dropped his clean image in return for a beard. Never having actually grown out his facial hair before, Ruco was surprisingly pleased with the results.

Ruco expressed, “I personally like the clean look and this is the first time I’ve had to grow facial hair for a series. I’ve been growing it for over 20 days now – it’s kind of addicting. However, keeping a beard is very troublesome because you have to get it trimmed very often.”

Not worried that his girlfriend will dislike his new look, Ruco laughed and said some women actually like this look.

Ruco has been training his shuffling and card skills for Hot Pursuit. Since there is heavy gambling in the series, Ruco watched a lot of classic gambling films to pick up tips and tricks. Hoping to get into character, Ruco said his hands have become numb from learning the different shuffling techniques.