Sammi Cheng and Andy Hui at Gym Together 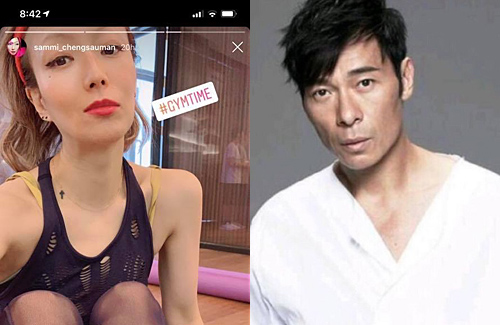 Days after Andy Hui’s (許志安) cheating scandal broke out, Sammi Cheng (鄭秀文) chose to forgive her husband due to her Christian faith. Trying to resume normalcy, Sammi has been busy preparing for her July concert at the Hong Kong Coliseum. Reporters had managed to catch her last month heading to rehearsals, but she did not comment any further on the affair. However, it seems Andy and she have truly reconciled as they were spotted at the gym together recently.

To prepare for her concert, Sammi has been diligently attending the gym every day to exercise. She keeps fans updated by regularly posting photos and videos of herself working out at the gym. The same cycle occurred on June 20, with Sammi posting a selfie on Instagram. But this time, sharp-eyed fans managed to spot a man looking a lot like Andy from the glass reflection in the photo. This is the first time that the couple appeared in the same frame in public after Andy’s scandalous affair with Jacqueline Wong (黃心穎) got exposed in April.

Andy’s career has come to a current standstill. With his cancelled concert, it was confirmed yesterday that his slot will be replaced with the concert BOYZ Kenny Kwan (關智斌) and Steven Cheung (張致恆).

As for Jacqueline, she has been blacklisted by TVB and it is rumored she has zero chance of ever returning to the industry. She may have to compensate TVB $30 million HKD due to her cancelled endorsement deals.

6 comments to Sammi Cheng and Andy Hui at Gym Together