TVB actor Savio Tsang (曾偉權) was remembered for his 13-year relationship with ex-girlfriend Cutie Mui (梅小惠). Though the public cheered for the couple, the two broke up after Savio started his career in Malaysia and was rumored to have become involved with local actress with  Frances Ng (葉麗儀). After more than 10 years, both Savio and Cutie remained single, and Savio shares his regrets of wasting Cutie’s youth. 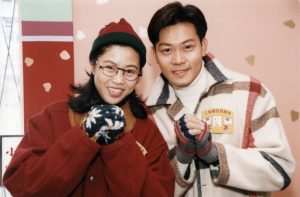 With a long relationship, Savio admitted that there was a time when he thought about marrying Cutie, “But I hoped to do better in my career and do more with it. She had a different idea and wanted to get married. There was a difference in our mindset.”

Reflecting on their relationship, Savio confessed that he felt sorry for Cutie, “When a couple was together for a long time, it seems like a waste to her years and it’s not fair to her. Time is valuable to women. It’s nothing for men to be in the forties or fifties, but it’s a big difference for women. In that respect, I am sorry. It can’t be avoided. I couldn’t stay with her because I feared wasting her youth.”

Cutie had once said in an interview that her biggest regret in life was only having one romantic partner. In reply, Savio joked, “She has a lot of suitors. She has no problem meeting someone.”

Savio emphasized that when he went to Malaysia to develop his career, he noticed that Cutie and his goals were diverging. Though Cutie was content with staying with the same company, Savio wanted to explore his options.

Sharing what happened to their relationship after he moved to Malaysia, Savio said, “Afterwards, something happened between us and there was a problem in the relationship. At that time, I also met another female artiste and felt like we got along. The newspaper made it seem like it was a big deal, but it was a timing issue. In a relationship, if you didn’t deliberately lie to someone, there is no right or wrong. I am only sorry for wasting her time but in other matters, there was nothing I can change.”

Savio later admitted his relationship with Malaysian actress Frances Ng, and they held a long-distance relationship for several years before separating.  For now, the 57-year-old actor enjoys looking after stray animals and will let things flow naturally, “I won’t go to seek out a partner. It’s more difficult at my age, and women around my age usually have more requirements.”

Although Savio and Cutie broke up, Savio maintains a good working relationship with Cutie’s elder sister Mui Shiu Ching (梅小青) and brother-in-law Lau Ka Ho (劉家豪). Mui Shiu Ching and Lau Ka Ho are TVB beloved producers and Savio consider them as his “benefactors.” Savio had appeared in many dramas produced by Mui Chiu Ching and Lau Ka Ho, beginning with his role in the 1982 drama The Green Dragon Conspiracy <琥珀青龍>. After returning to Hong Kong, Savio had a supporting role in Mui Shiu Ching’s Deep in the Realm of Conscience <宮心計2深宮計> and was nominated for the Best Supporting Actor Award.

Commenting that Savio is working with Cutie’s family despite his broken relationship with her, Savio replied, “It’s fate.”