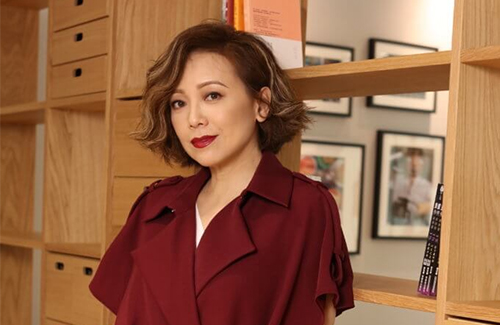 In the ViuTV drama Till Death Do Us Part <婚內情>, Sheren Tang (鄧萃雯) plays an art gallery owner who willingly allows her husband, played by Sunny Chan (陳錦鴻), to have an affair with another woman, assuming that that was the only way to salvage their marriage. Meanwhile, Sheren herself strikes an ambiguous relationship with a much younger man, someone who always had feelings for her.

Sheren and Sunny’s relationship in the drama may be complicated, but for all intents and purposes, Sheren’s character believed that she had met and married her Mr. Right.

But how about Sheren herself?

“I’m not in a hurry at all, but many of my friends don’t think so,” said Sheren with a laugh. “All of my brothers and sisters [at church] have been praying for me to find another half. I rather they help me pray about finding a new assistant and manager soon.”

Even Sheren’s domestic helper has been urging her to find a partner soon. “She’s always asking me about when I’ll have a baby. How can I just have a baby? Maybe she’s getting bored. I also don’t have pets for her to take care. I told her that I’m the baby that she has to take care of.”

Sheren is against having kids before marriage, explaining, “I’m extremely against it. My parents weren’t around. That is my biggest regret, and there’s no way to salvage it. I don’t want my child to grow up in a lacking family.”

At 53 years old, long gone were the days when Sheren would consider a relationship based on someone’s looks. “I used to think looks are important, but now, I value thoughts and the spirit. We should share the same sense of values, philosophies of life, and world views. I don’t mind being with someone younger, as long the age difference isn’t too much, and we have the same levels of maturity and communication. I’ve realized that I don’t really act like my age. I still have so many things I want to learn. I’m very curious. I like to have fun. I wouldn’t want someone who is too old spirited, who is too scared of riding planes. Of course, I wouldn’t want someone too young, either. I want to be taken care of. Not the other way around.”

Mentioning that artists like Marsha Yuen (原子鏸) and Ella Koon (官恩娜) have all met their husbands through dating apps, would Sheren also consider this? She said, “They were raised overseas and have more Western values. I was already in the workforce at 18 years old, and became a celebrity at 19. I don’t have a large pool of candidates.”

Sheren exclaimed that she’s still enjoying the single life, relishing the amount of freedom and control she has.

“Many people say that the older you get, the more you would want a partner. Perhaps I’m not old enough yet!”

TAGS: Sheren Tang, Till Death Do Us Part