“Someday or One Day” to Have a Film Adaptation?

Time-traveling drama Someday or One Day <想見你> is one of the hottest Taiwanese series in the first half of 2020 with its intriguing and head-spinning plot. Aside from receiving high ratings and critical acclaim across Taiwan, China, Korea, and Japan, it also dramatically boosted the popularity of leads Alice Ko (柯佳嬿), Greg Hsu (許光漢), and Patrick Shih (施柏宇). Although such success would usually set a sequel in tow, the creators decided from the start that there would be no follow-up story, much to the dismay of fans. However, it appears fans don’t have to be disappointed yet because rumors are circulating that a film adaptation is in the works.

Drawing in many devoted fans, Someday or One Day‘s regrettable ending was hard to digest. Despite loud calls for a sequel, the cast and production team believe that the story’s finale is logical and complete. Though a second installment is out of the question, it is apparent that the team still wanted to show gratitude to the audience for their support. 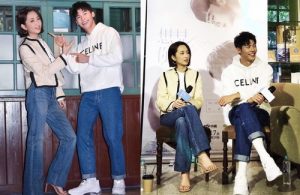 On August 24 – months since the last episode aired – Greg and Alice attended a live-streamed Someday or One Day symposium. Both wearing big smiles, Greg and Alice happily greeted fans and displayed their close friendship with the actress poking fun at Greg’s rise to stardom and joking that she already has her pick on him. Their appearance immediately had everyone in frenzy excitement and sparked rumors that the two will return for the film version if there is one.

Previously, rumors surfaced that China planned to do a remake with Chen Linong (陳立農) and Zhou Jieqiong (周潔瓊) as the leads. At the time, netizens unanimously opposed the idea because there is no need for a remake so soon, and it would be difficult to achieve the same success as the original version. But to the reassurance of fans, a source later debunked the news. With fans still lingering in the romantic world of Greg and Alice’s characters, having the pair star in the film version would be ideal.

1 comment to “Someday or One Day” to Have a Film Adaptation?