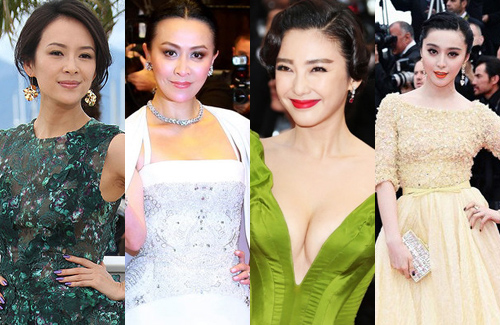 The 66th Cannes Film Festival was graced by many Chinese celebrities.  Opening on May 15, the film festival will last through May 26.  Fan Bingbing (范冰冰), Zhang Ziyi (章子怡) and Carina Lau (劉嘉玲),  Kitty Zhang (张雨绮), and Sammi Cheng (鄭秀文) sported bold looks on the red carpet. Kitty Zhang conveyed classic Hollywood glamour in an Ulyana Sergeenko gown. The bodice fit like a second skin before flaring into a sweeping skirt.  The chartreuse color was in sharp contrast against Kitty’s creamy skin and red lips. Kitty opted for minimalist ruby drop diamond earrings and a simple clutch for a flawless look. Appearing at the Cannes Film Festival’s opening ceremony in a pink Louis Vuitton gown, Fan Bingbing was all saccharine sweet with her hair flowing freely. The pale mauve dress has a sequined bodice which prevents the dress from looking ordinary. It’s rather different from her usual looks but no doubt, just as stunning. The next day, at Jeune et Jolie’s premiere, Fan Bingbing turned up in a splendid 2012 Elie Saab couture yellow gown. In her usual braided hairdo, she looked totally adorable in the dress which featured a heavily embellished top. Though the gown wasn’t  my favorite, the fact that Fan Bing Bing used heavy eye makeup and striking orange lip color to counter the paleness of the whole look makes it a win.

Later in the day, Fan Bingbing attended the Trophée Chopard party in an Ulyana Sergeenko Spring 2013 haute couture gown. Much as I love the shade of the electrifying pale blue, I just don’t care for this gown. The rolled up sleeve gave the whole dress a futuristic look. On the same day, Fan Bingbing turned up at The Bling Ring party in another Elie Saab number. The black lace dress was heavily embellished. Conservative yet sexy. It’s a risky dress to pull and Fan Bingbing barely pulled it off. In the photocall for Bends <過界>, Carina Lau wore a gray Elie Saab dress. Despite its flat gray color, she brought the dress to life. Besides a couple of rings on her fingers, her makeup and accessories were kept to a minimum to finish the look.

For Bend’s premiere, Carina turned up looking glamorous and elegant in another Elie Saab gown. Easily one of the best-dressed that night. At the premiere of a Touch of Sin <天註定>, Carina donned an asymmetrical antique gold gown with a huge bow on the front. Gold normally won’t work well on Asian skin because of the yellow undertones but the sheen on this dress is just like liquid gold, making the dress deliciously elegant. The best accessory is of course husband, Tony Leung (梁朝偉).

The Different Looks of Zhang Ziyi Zhang Ziyi wore a two-piece Christian Dior ensemble to Cannes’ opening ceremony. With her wig and an equally casual pair of earrings, Zhang Ziyi looked more like she was heading out for a day of shopping in town than the opening ceremony of the prestigious film festival.  The only thing I like about this outfit is her Christian Louboutin pumps. For the Un Certain Regard photocall the next morning, Zhang Ziyi wore a shortened version of the Giambattista Valli Spring 2013 Couture dress which featured a sheer top and a structured skirt with embroidered leaf details throughout. I love eccentric dresses such as this and the shade of green is beautiful. With the casual hairdo and yellow Christian Louboutin pumps, this look makes me think of spring and gives off cheerful vibes. The next day at the Jeane & Jolie premiere, Zhang Ziyi looked absolutely resplendent in a Carolina Herrera black/grey gown. There is nothing extraordinary about the design of the gown, but the bold prints just shouted for attention, in a good way. With her slicked back hair and nude makeup look, she complemented the attire with an elaborate necklace color-coordinated with the dress. The whole outfit was stunning and powerful. Andy Lau (劉德華) and Sammi Cheng (鄭秀文) promoted their new film, Blind Detective <盲探>, at Cannes. Sammi dressed wisely in a metallic dress that hugged her hips and gave her a curvaceous silhouette. Sammi looked like she stepped off a catwalk in the fashion-forward dress that suited her personal style well. Mainland actor Wang Baoqiang (王宝强) is known for his flamboyant suits. At the festival’s opening ceremony, he showed up in a striped purple/blue suit, which gave off a cartoonish vibe. The matching shirt and bowtie turned Wang Baoqiang into a mass of walking stripes and was awful.

This fashion review is written by Karen for JayneStars.com.