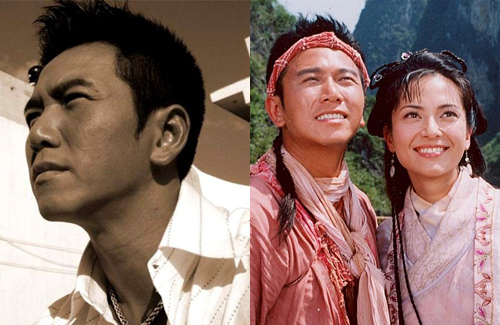 Deric Wan (溫兆倫) debuted in the early 1980s to much success, starring in many television classics such as Looking Back in Anger <義不容情>, Blood of Good and Evil <我本善良>, and The Breaking Point <今生無悔>. Despite his early successes, Deric’s reputation was tarnished by his colorful love life and bad breakups. With his dwindling popularity with Hong Kong viewers, Deric left TVB and shifted his career to Mainland China. However, moving to China did not change Deric’s tendency to get entangled in messy relationships.

Looking back on Deric’s past relationships, his first known relationship in the entertainment industry was with Sara Lee (李麗蕊) in 1984. The couple broke up after a year of dating. Only 20 years old at the time, Deric was devastated by the failed relationship and used Sara’s name to write a song, titled “My Sara”, to express his feelings. He later joined TVB in 1986. Through filming his first TVB sitcom, City Japes <城市故事>, he met and began dating the show’s female lead, Ho Mei Ting (何美婷). The couple broke up two years later.

Deric starred in his breakthrough role in Looking Back in Anger in 1989 and shot to popularity. In the same year, Deric married Lee Mei Ling (李美玲), a rich heiress from Malaysia. However, merely a year after their marriage, rumors were rampant that the couple was headed for divorce, which was finalized four years later.

The marriage failed due to Deric’s alleged affair with former Miss Hong Kong contestant, Bessie Chan (陳明君). Though they denied the relationship initially, Deric publicly acknowledged the couple’s relationship soon after finalizing his divorce from Lee Mei Ling in 1993. Their relationship only lasted for three years, with Deric later suing Bessie for repayment of $140,000 HKD, in which he claimed to have lent her while they were dating.

In 1996, Deric met Winnie Poon (潘燕妮), who was his assistant. He would later marry Winnie in 2002. However, prior to his marriage with Winnie, Deric had once registered for marriage with Miao Hong (苗紅) in 2001. However, Deric backed out of the wedding last minute and did not provide a reason. In 2002, Deric instead wed his assistant, Winnie, in Australia. Despite having known each other for many years, their marriage only lasted for one year. It was reported that Deric and Winnie invested in real estate. However, the poor investments caused them to owe debts of approximately $6 million HKD. In the end, Deric pushed the debts onto Winnie, forcing her to repay all of them herself.

Perhaps his most famous relationship was with Sonija Kwok (郭羨妮), whom he met while filming The Legend of Love <牛郎織女> in 2002. Because the couple met while Deric was still married to Winnie and they divorced soon after, Sonija was branded as a third party. This severely impacted Sonija’s career and tarnished her image. To salvage her career and reputation, Sonija broke off their relationship.

In 2004, Deric met Chinese model Wen Jiarong (溫嘉蓉). They dated for a few years before breaking up. Wen Jiarong later alleged that Deric not only swindled her of $500,000 RMB, but also physically assaulted her. Deric denied these allegations, with his manager indicated that Wen Jiarong was only yearning for publicity.

In 2008, he met Chinese actress Qin Li (秦麗). A year after, he was allegedly dating Chinese actress Pan Xingyi (潘星誼). In 2013, Deric finally seemed to settle down and married Zhao Ting (趙庭), who is 20 years his junior. The couple welcomed their daughter in 2015.