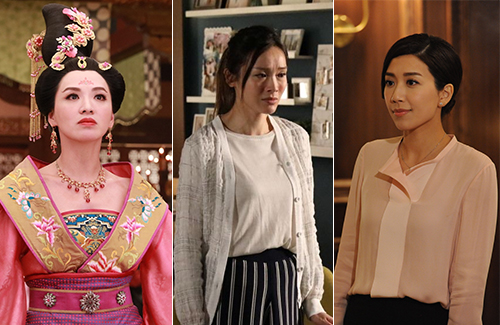 It’s still a couple of months away from TVB’s annual awards ceremony, but many netizens already have their pick for TV Queen. Maybe it’s finally time for a new queen to rise.

Alice Chan (陳煒) for Deep in the Realm of Conscience <宮心計2深宮計>

Alice is getting Best Actress buzz for portraying the villainous Princess Taiping in the Tang Dynasty drama. Although the role itself has been criticized for being poorly written, Alice’s performance as the heartbroken yet power hungry politician is rounding up netizens to be on her side for TV Queen.

The rising TVB actress is not unfamiliar to the TV Queen race. In 2017, Ali won TV Queen in Singapore’s StarHub TVB Awards and was a hot contender for TV Queen in TVB Star Awards Malaysia, but ultimately lost that award to Jessica Hsuan (宣萱). With still room for improvement and development, it is unlikely that Ali would beat out Alice or other veteran actresses for TV Queen this year, but her performance as a struggling first mother in Who Wants a Baby? has been widely praised, with critics calling Ali a “strong competitor.”