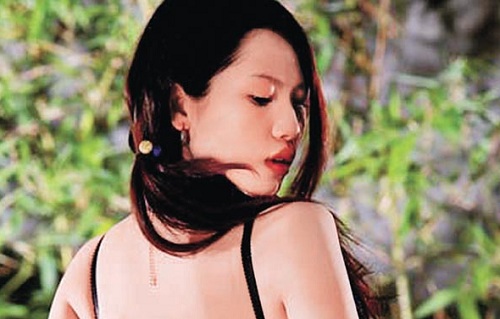 Since mainland model, Mavis Pan Shuangshuang’s former relationship with Raymond Lam Fung was exposed, she became an instant sensation. The first wave of bed photos and the second wave of kissing photos of Raymond and Mavis shocked Hong Kong. Yesterday, the third wave of a lingerie-clad Mavis circulated the internet. In the fifty photos from Mavis’ early modeling career, she revealed her chest, butt, and genital areas in titillating lingerie outfits.

Allegedly, Mavis still possessed photos of private bedroom and Bali vacation photos with Raymond which have not been revealed yet. Raymond realized that the “ticking time bomb” would explode at any moment. The explicitness of Mavis’ recent revealing photos have induced public outcry.

Prior to attaining fame, Mavis was a lingerie model and posed for numerous revealing photos. In recent years, 24-year-old Mavis underwent several plastic surgery procedures, morphing from being a “Kate Tsui” look-alike to an “Angelababy” look-alike. In the lingerie photos, Mavis had not received current plastic surgery procedures yet, thus her eyes and chest appear to be smaller than their present size.

Many people claimed that Mavis used Raymond to increase her own recognition levels, although this may have destroyed her own reputation in the process. Earlier, she was scheduled to appear at a Dorian Ho fashion show, but her attendance was cancelled due to negative publicity. However, on May 5th, Mavis will reportedly appear at a Tianjin Auto Show with a Japanese adult video actress, Aoi.

Jayne: Mavis Pan is definitely not shy in revealing her body before the camera. I don’t think there are further intimate photos of her and Raymond, otherwise Next Magazine would have published them already.

The above lingerie photos appear to have been “discovered” by netizens online. Many women do not like Mavis very much, but the men probably don’t care too much about the scandal.