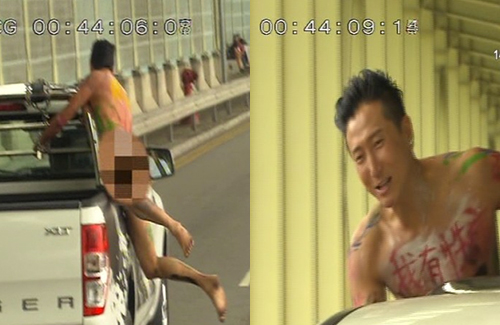 The TVB crime drama The Fixer <拆局專家> will be airing its two-hour finale on August 29. The action-packed series, starring Chin Ka Lok (錢嘉樂) and Mandy Wong (黃智雯) in the leads, has been airing in Hong Kong to positive reception.

In the final case, the audience are up for an intense ride while series’ main heroes attempt to take down the triad leader Law Gang, portrayed by Joseph Lee (李國麟). But the flirty thief Chan Dai Man, portrayed by Timmy Hung (洪天明), has other things to worry about.

In an earlier episode, Timmy gets stripped off of his clothes by his girlfriend, portrayed by Tracy Chu (朱千雪). In this daring segment, she ties Timmy outside of her car and parades him around the city. Tracy wrote “I have STDs” and “I am a scum” on Timmy’s body. As Timmy is meant to be naked in the scene, TVB comedically blocked out the sensitive areas.

Eventually, Timmy finds a way to free himself from his chains and jumps into the car to grab his pants. Thanks to his martial arts background, Timmy performed all of the dangerous stunts flawlessly.

6 comments to Timmy Hung Goes “Naked” For “The Fixer” Finale