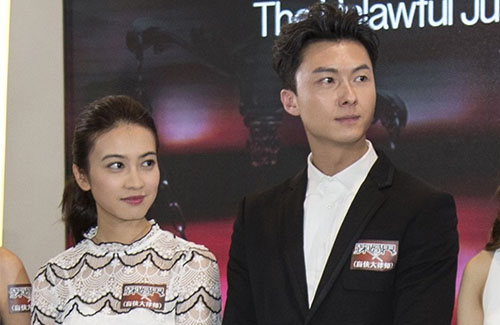 Vincent Wong (王浩信) is once again a hot fan favorite to win TV King this year, but with the oncoming anniversary drama season, taking that golden trophy would be just as hard as it was the previous year.

Last year, Vincent won the heart of all generations alike when he starred as “Ditch” in the time-traveling drama Over Run Over <EU超時任務>. Though he reached top five in Best Actor nominations, A Fist Within Four Walls <城寨英雄> actor Ruco Chan (陳展鵬) ended with the trophy.

This year, Vincent will be entering the race again with Legal Mavericks <踩過界>, a legal crime drama that stars Vincent as a blind lawyer. Netizens have been actively advocating for Vincent to win the TV King trophy, but with upcoming anniversary dramas like Line Walker: The Prelude <使徒行者2> and Heart of Greed 3 <溏心風暴3> that will soon take the spotlight, winning TV King will be much harder than expected.

We won’t know the winner until December, but Vincent’s Over Run Over and Legal Mavericks costar Tracy Chu (朱千雪) is already starting to rally votes for Vincent as much as she can. She said in an interview, “He is already TV King in my eyes. He plays a blind person this time, and it’s not an easy role to do, because viewers can automatically tell if you look like a blind person or not. I know how much work he’s put into the role, and I’m sure everyone can see that too. I’ve already mentioned this in bigbigchannel, but the netizens and I all want the same thing, and that it to see him win TV King. Of course, I hope he wins it overseas first, and then in Hong Kong. I already knew he was TV King material when I worked with him on Over Run Over. Whether it’s this year or next year, I know he’ll win it eventually. Hard work pays off. I hope our viewers will vote for him too.”