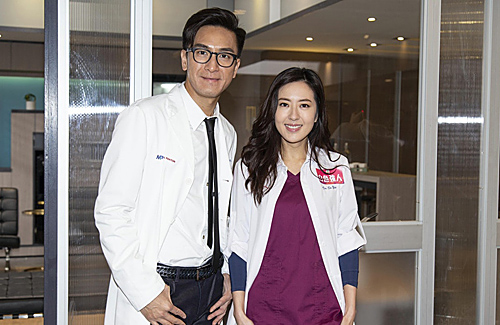 Jacqueline Wong (黃心穎) and Andy Hui’s (許志安) scandal has impacted not only the people involved, but also their work and careers. With her image plummeting to the lowest of lows, Jacqueline’s career may perhaps be taking the biggest toll. Not only has all her commercial and sponsorship jobs been canceled, the completed dramas that she has taken part in has also been shelved. Furthermore, her scenes in Forensic Heroes IV <法證先鋒IV> will also be re-shot with a different actress to substitute her role.

With the chaos between shelving dramas and re-shooting scenes, TVB had difficulty rescheduling their airing schedule. The latest news claim TVB has decided that Big White Duel <白色強人>, will be safe to air next. Starring Roger Kwok (郭晉安), Kenneth Ma (馬國明), Natalie Tong (唐詩詠), and Ali Lee (李佳芯) in the lead roles, the drama will revolve around the field of medicine, including the psychological toll on doctors as well as the advancements in medicine.

Roger will portray the Vice President Medical Director of a hospital who hopes to implement changes to medical treatments. However, talented doctor Tong Ming (portrayed by Kenneth) is against the idea, fearing that patients would not be able to afford the treatments they need. Both are approaching the subject with their patients’ best interests in mind. The drama explores the different viewpoints and perceptions on the “correct” path for medicine.

Good friends Kenneth and Natalie will be portraying a married couple in the drama. Their real-life friendship has often sparked romantic rumors in the past. However, both have denied any romance and instead refer to one another as brother and sister. In a previous interview, they had jokingly claimed, “It’s good that we know each other so well! We don’t have to forcefully act [our on-screen chemistry] out.”