TVB’s Big 5 Fadans: Then and Now 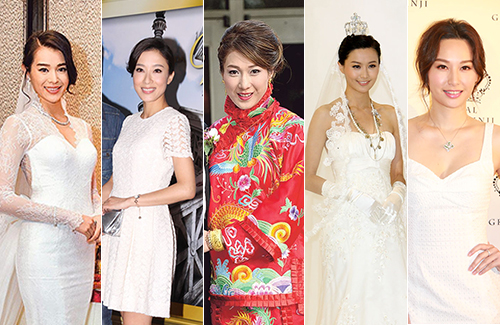 It was like the end of an era when Tavia Yeung (楊怡) tied the knot with longtime boyfriend Him Law (羅仲謙) in England last week. Tavia is the third out of TVB’s big five fadans to get married, after Myolie Wu (胡杏兒) in December 2015 and Linda Chung (鍾嘉欣) in February 2016. The remaining two, Fala Chen (陳法拉) and Kate Tsui (徐子珊), are still single, but they are no longer contracted with TVB.

With TVB’s former big five either married or gone, fans feel that they are witnessing the end of an age. The big five—Myolie Wu, Tavia Yeung, Linda Chung, Fala Chen, and Kate Tsui—dominated Hong Kong television screens for much of the late 2000’s and early 2010’s. But with only two out of the five still tied to a TVB contract today, 2016 may mark the official end of the big five era.

From TV Queen Competitors to Brides

With Myolie, Linda, and Tavia announcing their marriages one after another, the last few months have been a whirlwind of emotions for fans of the big five. The close proximity of their marriages has done nothing but encouraged the media to further pit the five against each other—while the competition in the past was strictly about winning TV Queen, the competition has now escalated to comparing their lives behind the silver screen.

Tavia: The Most Critically Successful Unlike the other four, who was introduced to the industry through beauty pageants, Tavia started from the bottom. She made her debut in 1999 as part of TVB’s 13th acting class and achieved her first major breakthrough four years later, winning TVB’s Most Improved Female Artist for her performance in 2003’s Vigilante Force <智勇新警界>. She then went on to win Best Supporting Actress in 2008 and Best Actress in 2012, becoming the only one out of the big five to win all of TVB’s major acting awards.

However, while Tavia may have the most high-profile list of awards, her marriage and wedding was entirely the opposite. Her wedding to Him Law was kept under the radar, and it was only after her sister posted pictures of England’s Leeds Castle when people discovered that the couple had gotten married.

Tavia said her TVB contract would be up in April, but it is still unknown if she would be renewing it. Though Myolie debuted in the same year as Tavia, her beauty pageant background gave her a significant head start within TVB. Myolie was already cast in lead roles four years into her debut, and hit dramas such as Triumph in the Skies <衝上雲霄> and Wars of In-laws <我的野蠻奶奶> boosted her fame. She won Most Improved Actress in 2002—a year before Tavia—and Best Actress in 2011—also a year before Tavia.

In 2015, Myolie announced that she would not be extending her contract with TVB, ending her 16-year relationship with the agency. She proceeded to sign a management contract with China 3D Digital Entertainment for a rumored estimate of $35 million HKD, making her the highest-paid former TVB actress. Myolie has also started a bridal shop, adding more to her wealth.

Myolie is not the first of the big five to leave TVB, but she is the first to announce her marriage. In December 2015, she tied the knot with boyfriend of one year, Philip Lee (李秉德). Unlike Tavia and Him’s, Myolie and Philip’s marriage was extremely high profile, with their two different wedding ceremonies and a 50-table wedding banquet that was attended by hundreds of guests. Myolie and Philip have only just returned from their 75-day honeymoon.

Linda: The Quickest to Rise Linda shot to popularity almost immediately after her debut. Her first role after winning Miss Chinese International in 2004 was a pivotal character in the sitcom Virtues of Harmony II <皆大歡喜>, a role that had her star alongside Steven Ma (馬俊偉). In 2006, after only two years in the industry, Linda won Most Improved Female Artist. Though Linda lost out to Myolie and Tavia in winning TV Queen, she consistently stayed on top in popularity polls.

In February 2016, Linda married non-celebrity Jeremy Leung in a private ceremony in Vancouver, Canada, Linda’s hometown. It was a modest wedding, attended by only her closest friends and relatives. Nonetheless, she did welcome the press to cover the news. Rumored to be already five months pregnant at the time, Linda may be the first of the five to become a mother. Linda’s contract with TVB is not over yet, but it is unsure if Linda will return to TV screens any time soon.

Kate: The Most Successful Film Actress Though Kate debuted in the same year as Linda, it took a while for her to gain affinity with the audience. Unlike Linda’s sweet, girl-next-door image, Kate took on a bolder, stronger character. She won Most Improved Female Artist in 2007, one year after Linda.

But Kate’s slower start in television gave her more opportunities elsewhere. She is the only one of the five to win an accolade from the Hong Kong Film Awards—Best New Performer for her role in 2007’s Eye in the Sky <跟蹤>. Out of the big five, Kate is the actress most likely to have a successful career in film. Though she may have already ended her contract with TVB, it is speculated that she would be signing a contract with Shaw Brothers, TVB’s partner in film production.

Fala: The Most Popular with Advertisers Fala is the youngest and the last to debut among the five. The Sichuan native, who made her debut after winning the 2005 Miss Chinese International Pageant, played a string of successful supporting roles before landing her first lead role in 2011’s Lives of Omission <潛行狙擊>, which was an immediate hit. Though she never won Most Improved Female Artist like her peers, she did win Best Supporting Actress twice, the first time in 2007 for Steps <舞動全城>, and a second time in 2010 for No Regrets <巾幗梟雄之義海豪情>.

Despite having the shortest filmography of the five, Fala is the most popular with advertisers, putting her as one of TVB’s highest-paid actresses. She is also the first of the five to leave TVB, in 2013, and is currently studying acting at the prestigious Juilliard School in New York.

28 comments to TVB’s Big 5 Fadans: Then and Now