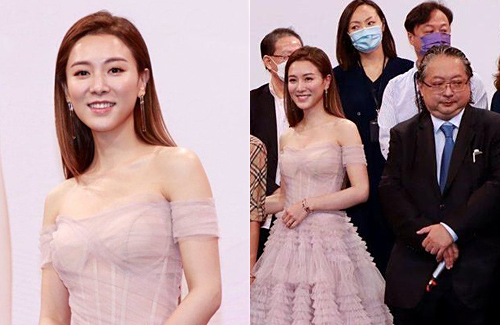 Known primarily for her acting works in film and television, Venus Wong (王敏奕) is also passionate about music and has released several singles. Deciding to pursue her music dreams further, Venus has signed with TVB’s sister company Voice Entertainment to prepare her first album.

Venus was introduced to this opportunity because her manager and Voice Entertainment’s CEO Herman Ho (何哲圖) are familiar with each other. Seeing that Venus is passionate about singing, Herman invited her to the studio for a vocal test and eventually offered a music contract. Shocked by the opportunity, Venus originally thought that Herman was joking.

Though they were not at the press event, Venus’ husband Derek Tsang (曾國祥) and father-in-law Eric Tsang (曾志偉) fully support her interests and career goals. However, when asked to comment on the rumored rift between Eric and Herman’s wife TVB executive Sandy Yue (余詠珊), Venus stated that she is not aware of this and will continue to focus on her work instead.

As Voice Entertainment’s artistes receive high exposure levels in TVB programs and often star in their dramas, some believe Venus’ new music contract may increase her chances for awards and eventual advance towards the station’s coveted Best Actress title. Venus clarified that she did not join Voice Entertainment in hopes of increasing her chances for Best Actress–she only wants to kickstart her music career and release more songs.

When it was pointed out that her signing ceremony was not as grand as labelmate JW (also known as Joey Wong 王灝兒), who signed with Voice Entertainment in August, Venus remained poised and indicated that it was hard to invite guests due to rise of local COVID-19 infections recently.