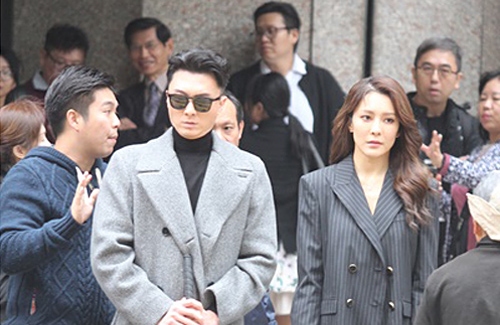 The actor avoids talking about his marriage.

Busy with the filming of Legal Mavericks 2 <踩過界II> recently, Vincent Wong (王浩信) shared that he spent Valentine’s Day working and had shot a  kissing scene with Kelly Cheung (張曦雯) via cheat cut due to the ongoing coronavirus concern.

The 38-year-old actor and other co-stars such as Owen Cheung (張振朗) have been working on the sequel to the well-received drama. Vincent, who plays a visually-impaired but accomplished lawyer in the series, also shared that he has been controlling his diet for a few topless scenes so as to present his best.

Asked if he would be making up for a Valentine’s celebration with his wife Yoyo Chen (陳自瑤), Vincent averted the question and continued sharing about work, revealing that there were quite a few unforgettable experiences on the set of Legal Mavericks 2, such as the cast and crew encountering street protests while filming in-court drama scenes.

While the recent coronavirus situation has affected the filming progress somewhat, Vincent hopes that things would get better. “We originally planned outdoor shoots in Myanmar; these were cancelled due to concerns that we would not be able to return to Hong Kong on time. The team is making changes to the story and all scenes would be shot here in Hong Kong.”

Replying to news that co-star Sisley Choi (蔡思貝) injured her head during filming recently, Vincent concurred that Sisley and Owen share many action scenes, while he has numerous in-court scenes which require a lot of memorization.