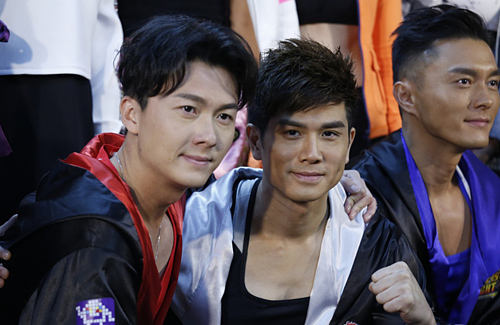 The actor takes on another challenging role after “Fist Fight”.

The cast of Fist Fight <兄弟>, including Vincent Wong (王浩信), Mat Yeung (楊明), Phillip Ng (伍允龍), Kaman Kong (江嘉敏), and Tiffany Liu (劉穎鏇) made a boxing center appearance to promote the drama. With the many action scenes in Fist Fight, Vincent discussed the difficulties in filming for the drama.

Showing off impressive 16.5-inch biceps, it was revealed that Vincent had Otto Chan’s (陳志健) help to lather baby oil all over his body prior to filming a boxing scene. Laughing in response, Vincent explained that he did this to for character to look better on camera, “The scene took nine full hours to shoot, but the (baby) oil would be absorbed by the skin in 15 to 20 minutes. We couldn’t drink water to hydrate ourselves, so I had it applied at intervals for better absorption.”

Expressing his long-time wish to try live broadcasting, Vincent shared plans to go ‘live’ along with his brothers Mat and Phillip in parallel with the dramatic plot to thank fans for their support. They would appear at around episode 20.

Busy with the filming of The Solutionist <解決師> which involves many close quarters combat scenes, Vincent had hurt his right hand as a result, which made clenching his fist hurt. He found filming for the new drama even more rigorous than Fist Fight, “Many parts required me to present quick, deadly moves. The risk factor is therefore much higher, as are chances of injuries.” Despite the pain, the actor says he does not intend to disrupt his filming schedule for the next few days.

Asked if he had read netizens’ reviews on Fist Fight after two weeks of broadcast, Vincent responded that it is difficult for a production to satisfy all viewer preferences. However, he is grateful for both positive and negative feedback, adding that he still has room for improvement. Pointing to the satisfactory ratings so far, he hopes audiences can continue to stay tuned as many revelations will be made later on as the plot gradually clears up.