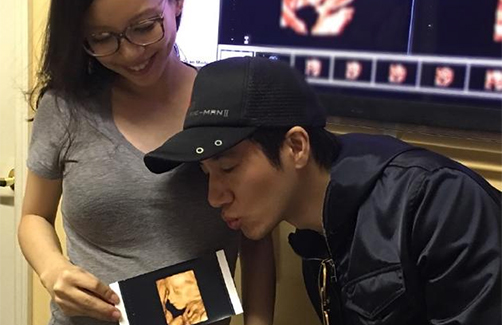 Wang Leehom (王力宏) will be taking two months off once his second child arrives.

The talented 40-year-old singer and actor, who has just finished his last concert project, announced on Sunday that he will be taking two months of paternity leave to spend time with his family and await for the birth of his second child with wife Lee Ching-lei (李靚蕾). Leehom and Ching-lei married in 2013, and welcomed their first child, daughter Jiali, the following year.

This announcement after Leehom completed the initial promotions for his movie Leehom Wang’s Open Fire Concert Film <王力宏火力全開演唱會電影>.The concert film had its world premiere at the Toronto International Film Festival (TIFF) on September 15.

Leehom said on Facebook, “Two months paternity leave is actually an idea I got from my friend Mark Zuckerberg.”

Zuckerberg, creator of Facebook, made headlines last year when he announced that he’d take two months of paid paternity leave for his newborn daughter, Max. Facebook is notorious for offering a very generous parental policy, in which both parents get to take up to four months of paid leave after the birth of their child.

Leehom urged more new fathers to take parental leave, saying, “If someone [Zuckerberg] that busy can do it, why can’t I? Studies show it’s good for building strong family interaction, decreasing postpartum depression and… having been through it once before guys, my two cents is, it’s just an awesome time to bond.”

The actor-singer then proudly said that his staff at Homeboy Music Inc. can all receive up to two months of paid maternity and paternity leave.

He ended his message saying, “Open Fire Film Concert will get fired up again in November!”