Who is the Big Boss? Two Different Endings Were Prepared for “Dead Wrong” 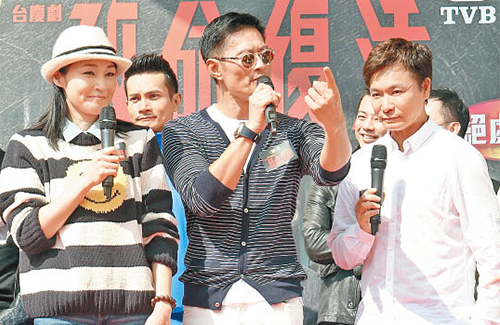 TVB anniversary drama Dead Wrong <致命復活> has entered its final week of broadcast, and viewers are breaking discussion forums to share their opinions about the drama’s “big boss.”

The suspense drama stars Roger Kwok (郭晉安) as Vincent, a man stranded in a deserted island by the coast of Vietnam for 10 years. After his escape, he attempts to find those who were responsible for his imprisonment.

Last week, viewers learn that Vincent’s boss CK (KK Cheung 張國強) had attempted to plot against his career 10 years ago, but was not the final mastermind in orchestrating Vincent’s capture in Vietnam. With CK out of the picture, viewers are guessing that Vincent’s ex-wife Cathy (Joey Meng 萬綺雯), her husband Yan (Kenny Wong 黃德斌), Vincent’s friends Max (Vincent Wong 王浩信) and Queenie (Rebecca Zhu 朱晨麗), as well his own older brother Lung (Jerry Ku 古明華) were involved in the kidnap. But the cast of the show have kept their lips tight, and urged viewers to wait for the big revelation coming this Saturday.

A few days ago, a Hong Kong source reported that producer Lam Chi-wah (林志華) had prepared two different endings for Dead Wrong, and that the show will air the appropriate ending depending on the audience’s reactions. The producer said he won’t comment about the two endings, but he did reveal that clues of the final boss were already laid out in the show’s first episode.

A few days ago, the cast attended a promotional event in Tuen Mun, where they openly discussed about the show’s big boss with their fans. “I am keeping my eyes on Kenny now!” said Roger, when reporters asked for tips on who the final boss may be. “When the time comes, you’ll see the real him.”

With the TVB Anniversary Awards only a week away, does Roger have the confidence to win TV King? “All of us had put in a lot of effort for our roles. I just want to spend the night happily. It doesn’t matter if I win or not!” (Will you vote for yourself?) “Kenny and I will be voting for each other!” Joey said, “I will vote for [Roger] of course. I would like to win Best Drama the most.”

Vincent said, “Not many people know who the big boss is. I can count all of them with only one hand. They’re all very surprised about the boss’s identity! And it’s definitely not my mom [Susan Tse 謝雪心].”

30 comments to Who is the Big Boss? Two Different Endings Were Prepared for “Dead Wrong”