With Quivering Lips, Shirley Yeung Discusses Spilt In An Exclusive Interview with TVB’s “The Scoop” 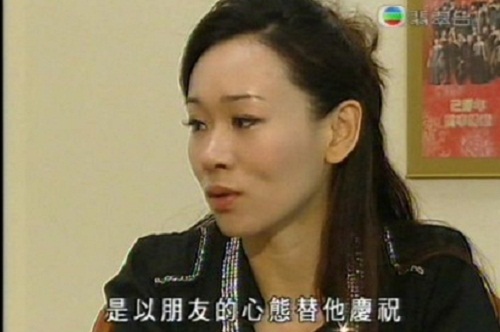 After Shirley Yeung’s (楊思琦) one-sided announcement on breaking up with her boyfriend of nine years, Gregory Lee (李泳豪), her image had been burdened by the scandal. Accepting an interview with TVB’s The Scoop <東張西望>, Shirley’s face was drenched with tears. Explaining the rumors, Shirley reiterated that since last year, cracks had started appearing in her relationship with Gregory.

Asked exactly when the formal break-up occurred, Shirley fumbled that it was during the month of February to March, when she had formally moved out of [Gregory’s] apartment. When questioned why she still turned up at Gregory’s birthday party last month, even though they had already broken-up, Shirley explained, “Our mutual friends were all there. Gregory really wanted me to be there. As a friend, although we had broken-up, I did not want the happy occasion to disappear.” Shirley mentioned that days before her official break-up announcement with Gregory, she had revealed her intentions to do so in a phone call with him.

With her lips quivering, Shirley denied marriage intentions with Gregory. While noting that she could not entirely let go of her relationship with Gregory yet, Shirley stated that she wanted to find someone who can truly take care of her. Asked about third party rumors, Shirley said that there were friends who cared about her by her side. Although she said that she was not pregnant, she liked children and hoped to have children soon. Her family would be very happy if there were grandchildren.

This article was translated by Ah K for JayneStars.com

Shirley’s interview on The Scoop can be viewed at below link:

89 comments to With Quivering Lips, Shirley Yeung Discusses Spilt In An Exclusive Interview with TVB’s “The Scoop”