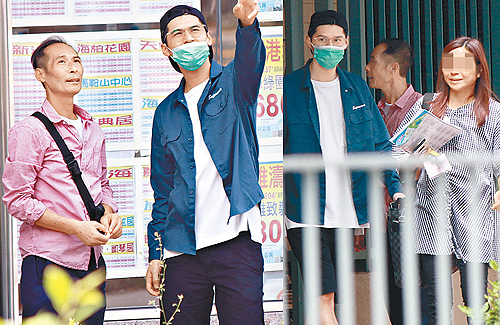 Above: Carlos Chan and his father look at apartment homes.

Since becoming a household favorite after starring in TVB drama Daddy Cool <逆緣>, Carlos Chan (陳家樂) has already managed to pocket over $3 million HKD in the first half of 2018. With many job offers lined up, Carlos was seen casually shopping for a new condo home with his new money.

Having spent the first 15 years of his career working in minor roles, Carlos was virtually unknown to the public. But after Daddy Cool, the 31-year-old actor became an overnight sensation due to his good acting, healthy image, and down-to-earth personality. Highly promoted by EEG, it’s speculated that management priming Carlos to become the next Nicholas Tse (謝霆鋒) and William Chan (陳偉霆).

Hoping to move his family into a bigger and more comfortable home with his bigger paycheck, Carlos was seen shopping around for an apartment with his father and a real estate agent. Currently residing in the area of Ma On San, Carlos didn’t really want to move too far and was looking at bigger places in the same area. While looking at the listings, Carlos and his father were extremely pleased with one particular $15 million HKD property located a more secluded area with water views.