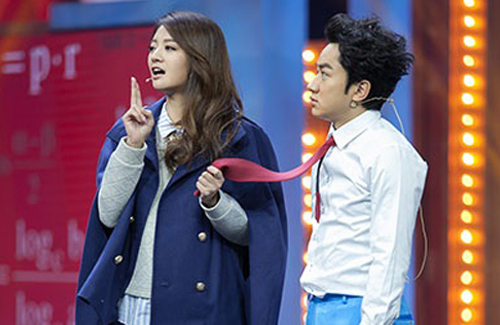 A new reality show called The Negotiator <王牌對王牌> began airing on Zhejiang TV at the end of January. The show pits two teams, led by Hong Kong artiste Wong Cho Lam (王祖藍) and mainland Chinese television hostess Xie Na (謝娜), against one another in a series of indoor games and competitions.

Every week, The Negotiator invites different guests depending on the theme, which may range from “Participants in Running Man <奔跑吧兄弟>” to “Friends of Wong Cho Lam.” This week’s episode will be school-themed, which means guests like Hong Kong singer/actress Charlene Choi (蔡卓妍) and mainland Chinese actress Zhou Dongyu (周冬雨) will make an appearance in school uniform.

Wong Cho Lam’s team will consist of Taiwanese actresses Ady An (安以軒) and Evonne Sie (謝依霖), as well as Taiwanese actors Richie Ren (任賢齊) and Mike He (賀軍翔). When the team members were given a choice of whom to sit next to in the show’s classroom, many audience members assumed Ady would select Mike, since they had previously collaborated on the drama Go, Single Lady <真愛遇到他>.

However, Wong Cho Lam surprised everyone when he pulled off his jacket to reveal that he had printed multiple photographs of Ady on the back of his shirt. Touched by his gesture, Ady chose to sit at the desk next to him.

The Negotiator will feature many classroom-themed games in the upcoming episode, including a barefoot version of tug-of-war and a competition related to multiplication tables. New episodes air every Friday evening.