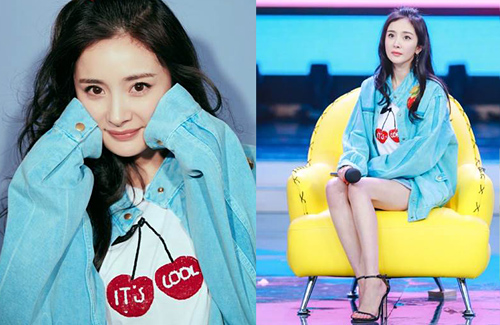 Yang Mi (杨幂) isn’t the only Chinese celebrity pestered by haters, but one netizen took it too far in defaming the 32-year-old actress. Deciding that she had enough, Yang Mi sued the hater that repeatedly slandered her online.

The court ruled in Yang Mi’s favor and required the offender to compensate the actress 50,000 yuan for inflicting emotional distress and 16,000 yuan for court fees. The offender cried that she is a poor student and requested the judge to reduce the fines and fees.

According to reports, the hater has a surname of Peng and claims to be a 25-year-old university student. She has slandered Yang Mi multiple times online; calling her a fake friend and that she specializes in betraying others by stabbing behind their backs. Many hateful posts were titled, “The battle between Yang Mi and Tiffany Tang (唐嫣)”; “Bribing a water army and buying notices”; “She has bad blood with her best friend”; and “Global star Yang Mi is best at stabbing at other people’s back”.

In a court hearing, Peng defended with claims that all the posts were written with thorough investigation. The header on Peng’s page also has a notice that said, “I am specifically stating that this article is based on online news sources and personal speculations. It does not represent the truth in any way, so no responsibility is taken for the genuineness.” Peng further added that the posts did not border defamation, and emphasized that those posts were appropriate speculations against a public figure.

However, the judge believed that Peng’s actions did harm Yang Mi’s reputation, and ordered Peng to compensate the actress by removing all of the posts and post an apology on her webpage for 30 days. In addition, Peng is to pay the aforementioned fines to Yang Mi.

Netizens criticized Peng for claiming to be a student while hoping to dodge court fines, and praised Yang Mi for doing a great job in defending herself against haters.