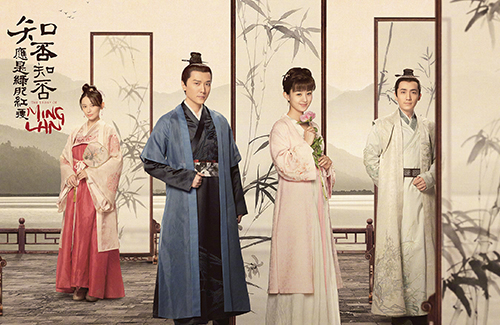 On and off screen couple Zanilia Zhao Liying (赵丽颖) and William Feng Shaofeng (冯绍峰) will be spending Christmas with viewers through their upcoming drama The Story of Minglan <知否知否应是绿肥红瘦>, airing December 25th. Based on the novel of the same name, The Story of Minglan is set during the Northern Song Dynasty, and follows the young woman of a noble family, who despite being the least favored child, eventually finds her way into a successful career and brings her family glory and honor. It stars Zanilia in the title role, with William as her love interest.

In a recent teaser for the show, William tells Zanilia, “I’m going to lose to you for the rest of my life.”

Zanilia and William announced their marriage in October 2018, a year after their romance came to light. The couple reportedly started dating while collaborating in the 2018 fantasy film The Monkey King 3 <西遊記·女兒國>, and according to The Story of Minglan producer Hou Hongliang (侯鸿亮), Zanilia and William were already dating before starting work on the show.

“The Story of Minglan was their journey toward mutual understanding,” he said.

Hou Hongliang, who has produced dramas such as Nirvana in Fire <琅琊榜> and When a Snail Falls in Love <如果蜗牛有爱情>, shared that the decision to cast both Zanilia and William was a coincidence; while Zanilia was his first choice for the role of Sheng Minglan, William had auditioned for his role as Gu Tingye and beat out his contenders. Guardian <镇魂> star Zhu Yilong (朱一龙), who comes in between the two leads, was handpicked by director Zhang Kaizhou (张开宙). At the time of Yilong’s casting, he was still a relatively unknown actor.