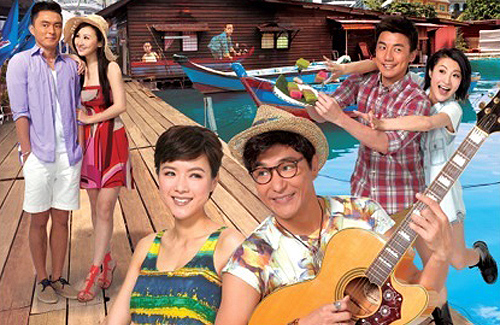 Earlier this week, the cast of TVB’s Outbound Love <單戀雙城> went to Malaysia to promote the upcoming romantic drama, which will be premiering in both Hong Kong and Malaysia on January 20, 2014. The cast greeted their fans in a variety of different languages, and played games with the fans in attendance. Lead star Ruco Chan (陳展鵬) performed the drama’s sub-theme single, “Just Half a Step” <差半步> live and Elaine Yiu (姚子羚) also showcased her vocals.

Produced by Fong Chun Chiu (方駿釗), who debuted his first TVB production as a producer with last year’s Missing You <幸福摩天輪>, described Outbound Love to be “refreshing and romantic”. He said, “Many small television productions in the past have emphasized family commentary, but I wanted Outbound Love to focus on the relationships between the two pairs, Ruco and Aimee and Xiawei and Tony. The drama will be more focused on their romances, and the side stories that come with it.”

The producer recalled a rather touching and unforgettable filming experience between Ruco and Aimee, “We were shooting in a small town near Kuala Lumpur, and the scene was about Ruco and Aimee watching the sunset together in a tree house. It was perfect. In my eyes, this [drama] is their representative work.”

Outbound Love spent nearly an entire month shooting at various locations in Malaysia, including Kuala Lumpur and Penang. The drama also filmed at some of Malaysia’s hottest tourist spots, such as the Petronas Towers, Sekinchan, the Batu Caves, the Chew Jetty.

Shik Shik travels to Malaysia for work and meets the excruciatingly laid-back and procrastinating local guide Luk Kung Chi (Ruco Chan). Unable to bear Kung Chi’s carelessness and lack of professionalism, Shik Shik has a strong distaste for him. However, Kung Chi’s wishy-washy personality is stemmed from a hurtful past he wishes to forget.

The 22-episode Outbound Love is expected to premiere on Monday, January 20 at 8:30 PM on TVB Jade and HD Jade.