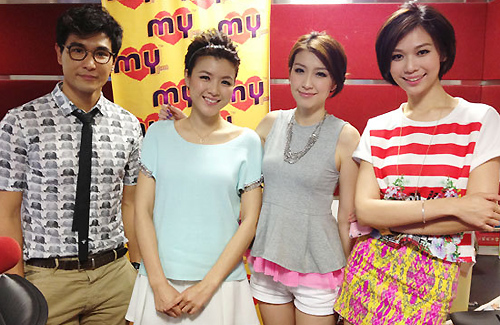 At Outbound Love’s Malaysia press conference held last Sunday, the cast expressed their hopes to explore the city during their free time between shoots. However, Kuala Lumpur’s recent rainy weather conditions affected the serial’s shooting schedule and many scenes had to be either re-shot or postponed.

Despite the hot climate, Ruco expressed that the filming process had been quite easy as fans and pedestrians were very cooperative and quiet during the shoots. His hardest challenge, however, were the scenes that involved his character introducing Malaysian delicacies to tourists. “I had to talk about the dishes’ cooking styles and history. It took a lot of effort to memorize the script.”

Ruco also exclaimed that Malaysia has many pretty women and especially praised costar Belle Chan (陳翠媚). Having to appear shirtless in several scenes, Ruco joked that he does not want to be alone and hopes to see his female costars wear bikinis.

Aimee Doesn’t Have Time for Moses

As Aimee’s boyfriend, Moses Chan (陳豪), will be turning 42 years old on April 16, the leading star was asked if she has plans to celebrate the birthday occasion with him. Aimee smiled, “I will be busy filming. Since my birthday was on April 1, we decided to celebrate both of our birthdays together. He may visit us on set for a few days to celebrate some more, but I will be busy! I won’t have time to be with him.”

Aimee affirmed that she will not request for a vacation leave when Moses visits, expressing that filming is more important. “We can eat some Malaysian cuisines together, and hopefully we’ll have time to come back here for vacation in the future.”

However, when it comes to food, the 32-year-old actress groaned that she did not realize she was allergic to durians until recently. Her throat had been feeling uncomfortable all day and she needed to take anti-inflammatory medication.

Matt said he has filmed several travelogues in Malaysia before and is already familiar with the culture. “When I have free time, I will go out to eat some of Malaysia’s bak-kut-teh and search for some souvenirs for my Hong Kong friends. They’re very interested in Malaysia’s chicken jerky and bak-kut-teh bags. I really don’t know how I’m going to ship all of it home.”

Outbound Love is a joint production between TVB and Malaysia’s Astro Television. Astro artists will also guest star in the serial, including Justin Lan (刘界辉), Jordan Sen (盛天俊), and Jocelyn How (侯诗玲). The serial is slated for a late December 2013 release on Astro on Demand.