“The Empress of China” Censors Cleavage After Re-broadcast 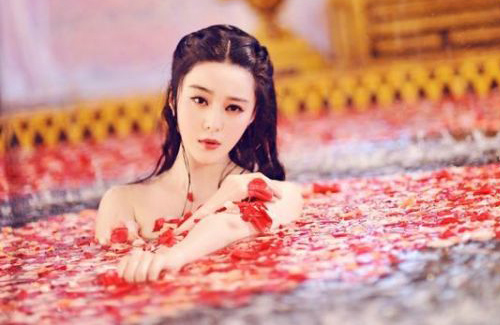 Fan Bingbing’s (范冰冰) new drama The Empress of China <武媚娘傳奇> was halted in its broadcast last week. Although Hunan TV claimed it was due to technical difficulties, many speculated that it was due to the excess amount of cleavage that was shown in the series. After re-editing, The Empress of China resumed broadcast on January 1, 2015. Viewers noticed that the screen zoomed in on close-ups of the actresses’ faces and cleavage shots were largely absent since its rebroadcast.

While some viewers were thrilled after the series resumed its broadcast, some netizens were displeased with the amount of editing that was done. Prior to editing, the female cast wore eye-catching Tang costumes with plunging necklines. Since the rebroadcast, wide shots and close-ups were heavily employed to minimize the amount of cleavage. Some netizens commented, “They’ve turned into big-headed dolls!”

However, despite the re-edits to please The State Administration of Radio, Film and Television (SARFT), the viewership ratings of The Empress of China remains at an all-time high, proving that Fan Bingbing’s presence on the small screen still trumps all.

TVB has also acquired the broadcasting rights for The Empress of China from air. TVB executive Tsang Sing Ming (曾醒明) stated that the drama will be repackaged for appropriate editing and voice dubbing.

TAGS: The Empress of China