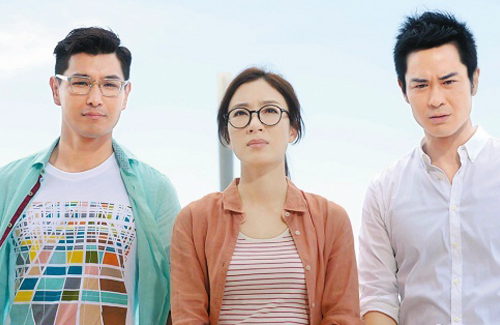 When Simon Yam retires, Ruco can be the next camera brand ambassador.

Episode 12 Ruco reveals himself to Tavia whose heart is already set on Kevin for reasons I really do not know except she SAW him first. I find her way of falling for Kevin which is love at first sight as rather shallow. Surely… it should be more? Kevin had never been affectionate towards her.. but Ruco did all he could, thinking she was waiting for him and he said something quite romantic at this point but will be scary later on;

“I have lost my family, and my face. I will not lose you too”

Tavia was right to question why reveal now and he replied with much contempt;

Some may think your new looks is an upgrade from the old one. Such contempt for your new looks and I was thinking.. come on, think about how ridiculous it is that Kevin has his face 90% burnt and he had 30 plus surgeries and ended up looking like you. Whose the surgeon? Sign my boyfriend up!!

Anyway Episode 12, Ruco was extremely happy. But in episode 13, Tavia drew Kevin’s face instead of Ruco’s and she could no longer be in a relationship with him. She tried to avoid (bad move) and when she couldn’t, she just said they can’t be together. Poor Ruco was love sick and confronted her until he saw the painting she drew, went to agency to find her only to have Samantha to tell him the absolute truth; Tavia fell for Kevin first, then Johnny appeared but it didn’t matter because she wanted the looks not the person and to Tavia Ruco was a nobody. Ruco in anger laughed like a maniac and said;

He also found out Kevin had feelings for Tavia too. Back at home he confronted Kevin. You gotta hand it to him; he really tell the person straight in the face and angrily he said;

“If I wasn’t taken away, if I had your life, I would never have lost to you! I’ve lost my life, my family and now the woman I love. I can’t keep losing to you!!”

Kevin looked guilty, tried to persuade Ruco that since he has returned, let’s try to rebuild life but Ruco was beyond persuasion. He was pissed off.

This was also because earlier he saw his mom What’s App his dad asking if they should bring Ruco back to hometown to visit relatives and he saw his dad replying “No, he is an outsider” and he thought to himself;

“So… they haven’t accepted me as part of the family”

and it was an ugly reaction.

In actual fact the father wanted to write and did write, “He is not yet in our social circle, better not let him come and face them, making his life difficult” and his mom chastised the father for relying too much on auto correct.

But I wonder what does Tavia expect? Kevin to love her back? Kevin said to Ruco;

But he is already having feelings for Tavia. This is why I dislike Tavia aka Jan. Yes Ruco shouldn’t behave so childishly but he has a right to be angry, but at some point the anger must translate to acceptance that you can’t force love. The problem is Jan. She has her head in the clouds since day 1. Her notion of love is to me childish and juvenile. And Samantha was very cruel in the way she dismissed Ruco much like how callous Tavia was for doing it the way she did. That sow the seed for hatred and what nots. Brothers, never ever fall for the same woman. Ever. Especially one as shallow as Jan.

There is another story in this story.

Susan Tse’s purpose in this series is to die. Because I can’t really understand why she is in here and her death is so meaningless. One day she was in Vivien’s apartment when suddenly a secret passageway opened and it was the blind boss so Susan thought blind boss and Vivien are lovers and very secretive about it. Later she was murdered and her death was blamed on Madam Chik who obviously isn’t the murderer. I quite like Madam Chik; wait! Is it Madam Chik? I think so! She was so pissed not because she was arrested but because anyone angry with her should kill her and not her aunt. Anyway case solved and you kinda wonder why kill Madam Chik in the first place? Because Kevin deduced the reason almost immediately except he couldn’t find the passageway.

Episode 13 did explain how blind boss isn’t blind. He is blind but he had some google eyeglass or whatever and suddenly he can see so clearly he is a sharp shooter saving Vivien’s life. He has that necklace with him and again I wonder what’s the significance of that? He is a collector that will get what he wants in anyway he can do? Anyway Kevin is now investigating Vivien, convinced she has something to do with everything and Vivien is investigating Kevin, wondering whether could he be the guy in Manila?

Heads in the clouds.

Right now I am thinking this series is exciting for some part. I mean Vivien got the interesting female role. But I am kinda bored with the love story which is non existent. I am not even convinced Kevin loved Tavia. It is getting a bit shallow in terms of the story and why certain characters die. I feel myself thinking maybe, I am watching a story with the potential but is now turning into run of the mill stuff.

Performance wise, Ruco and Kevin is my choice for couple of the year. Ruco is hardly tested even if he had a few emotional scenes. Kevin however is now really into biting his lips and grinding his teeth when speaking his lines. I wonder what happened. Tavia is wasted and someone please rip off that specs from her. Such high bridge for a nose and still she had to tug at the specs.

Vivien improved a lot. I do like… Becky Lee is it? Becky something? She is somehow convincing as a high level policewoman.

The rest were quite simply only required to sleepwalk in their roles.