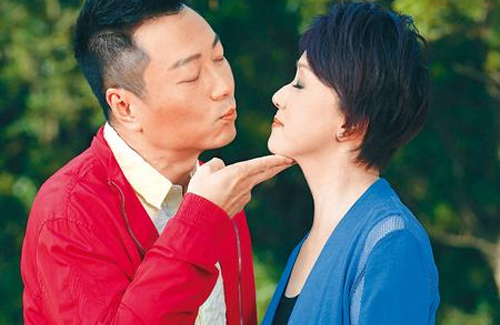 TV King Wayne Lai (黎耀祥) and Cantonese opera star Joyce Koi (蓋鳴暉) are old time buddies. The pair first met on the set of Journey to the West 2 <西遊記貳> in 1998, in which Wayne portrayed Xuanzang’s disciple Zhu Bajie and Joyce portrayed the Guanyin Pusa. Though the pair has stayed in contact over the years, they never really got a chance to work together until the 2008 sitcom Off Pedder<畢打自己人>.

Next year may be the year for Wayne and Joyce to grace television screens together again. Yesterday, Wayne and Joyce filmed a short clip for the sales presentation trailer of the TVB comedy drama, Opera Rouge <水髮胭脂>. The planned project tells the story of Joyce, a Cantonese opera star, who is too shy to chase after love as she is too used to her identity as a cross-dressing performer.

As the trailer was given a one-minute time limit, Wayne and Joyce filmed only a few scenes. In order to effectively display the drama’s humor and absurdity in the short time frame, an exaggerated filming style was executed. One scene had Joyce almost slipping off a cliff, to represent her feelings whenever she was approached by the opposite sex. Another scene had Wayne flirting with Joyce in extremely “chok” expressions, and the pair also pretended to kiss!

Wayne explained, “We only had about two scenes to tell the story of our characters, so everything has to be slightly exaggerated.”

Though Opera Rouge has not officially been green-lit by TVB as of yet, Wayne hopes the project will be approved as it has been several years since he last filmed a comedy.

Joyce, who has not filmed dramas in three years, expressed her happiness in working with Wayne and filming again. She stated that she still has a series contract with TVB. Though filming TVB dramas are laborious, she is excited to meet the TVB film crew again, whom she described as “close like family.”

Asked if Wayne was any different now compared to 15 years ago, Joyce said, “He’s still a good man. The only thing that changed is that he has become much more mature. When we filmed Journey to the West, he was like a big kid. Now he’s much calmer and knows how to take care of others.”