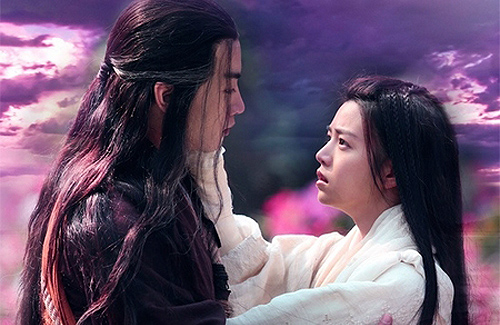 Airing on Hunan TV, The Romance of the Condor Heroes will take over the time slot of period drama Sound of the Desert <风中奇缘>, which stars Cecilia Liu (刘诗诗), Hu Ge (胡歌), and Eddie Peng (彭于晏).

Chen Xiao (陈晓) stars as the protagonist Yang Guo, a mischievous urchin boy who falls in love with his master, the beautiful Little Dragon Girl of the Ancient Tomb Sect. Portrayed by Taiwanese actress Michelle Chen (陈妍希), the casting of Little Dragon Girl caused quite a controversy in social media, and some netizens even dubbed Michelle as “the fattest Little Dragon Girl in history.” Due to the pressure, Michelle said she had even contemplated suicide. Yu Zheng came to her defense, explaining that Michelle was carefully selected among twenty other famous actresses and that her performance as Little Dragon Girl was stellar.

Yu Zheng’s insistence to rewrite certain plot elements for the adaptation also angered many fans, who expressed that they felt the producer was ruining the classic. Yu Zheng’s previous efforts to adapt a wuxia novel, such as The Smiling, Proud Wanderer adaptation Swordsman <笑傲江湖>, was slammed by critics and fans alike.

Nonetheless, the negative controversy surrounding The Romance of the Condor Heroes may create enough hype to pull in more viewers for Hunan TV, as Sound of the Desert is currently performing below expectations.

“The Romance of the Condor Heroes”