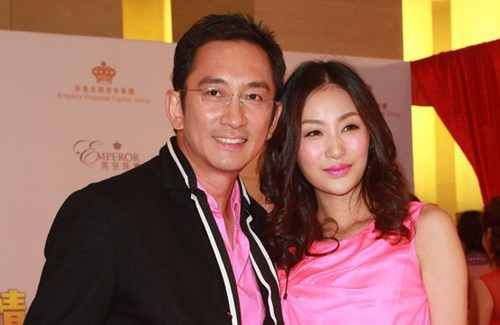 Officially announcing an end to his seven-year marriage, Lawrence Ng (吳啟華) blamed himself for not being a responsible husband in dealing with his marital problems. Lawrence’s wife, Mainland Chinese actress Shi Yangzi (石洋子), revealed how the couple has been living separate lives in the last four years and the difficulties that came along with the unfortunate decision.

Firmly stating that the divorce had nothing to do with the involvement of a third-party, Yangzi said, “They say that it’s due to communication problems because of our [21-year] age gap, but I’ve been constantly trying to overcome it. Our relationship is like Patrick Tse (謝賢) and Deborah Lai (狄波拉); even if we’re separated, we remain as friends and family – we can have dinner and travel together. We will work together for our daughter.”

With regards to allegations that Yangzi’s wish to return to work resulted in the divorce, she disclosed that she has been working all along during their marriage. However, Yangzi did reduce her work time to take care of the family.

Yangzi’s emotions were unstable and she felt very unhappy after the end of their marriage. Yangzi explained, “I felt a little down, but I’ve been calm because we’ve been separated for three to four years. Even though we both accepted this fact, when [our marital problems] surfaced publicly, we were both very shocked.”

Since Lawrence and Yangzi do not want their divorce to affect their six-year-old daughter, both have decided to uphold joint custody. The decision on where their daughter will reside has not been decided yet, but Lawrence will move back to Hong Kong while Yangzi will live in China.