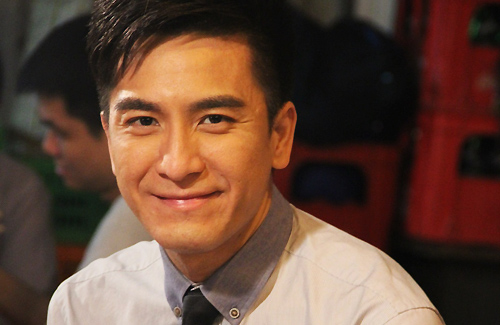 TVB will continue to rely on public votes to determine this year’s TV King, TV Queen, and Best Drama at the 2013 TVB Anniversary Awards <萬千星輝頒獎典禮>. Although many grand productions have yet to air, viewers are already deep in discussion about possible winners.

Recently, a Hong Kong magazine spoke with TVB to uncover more details about this year’s awards. TVB Deputy Director of External Affairs Tsang Sing Ming (曾醒明) shared that the company will again implement the popular vote system. “Honestly, it is too early to be discussing this. No decision has been made. However we will definitely choose our winners with the popular vote method. We will discuss the details later….”

Raymond Lam (林峯), who lost the TV King title last year despite being a favorite to win, is recently rumored to be on bad terms with TVB. When asked if Raymond would appear at this year’s awards, Mr. Tsang replied, “Raymond Lam does not have any series on air this year, so he probably will not receive a nomination. Will he show up at the awards? We must wait to see if our Artist Management Department can get him onto the schedule.”

Although the award ceremony is only three months away, many of the top series contenders have not yet made their debut on the TV screen. Popular candidates include the upcoming Brother’s Keeper <巨輪>, My Prime Lady <My盛Lady>, Will Power <法外風雲>, and The Hippocratic Crush 2 <On Call 36小時 II>.

As for TV King, many fans are rooting for Francis Ng (吳鎮宇) in various unofficial polls, clearly mesmerized by his performance in this summer’s hit Triumph in the Skies 2 <衝上雲霄II>. Kenneth Ma (馬國明) also emerged as a dark horse favorite, given a second chance to win Best Actor this year with his popular portrayal of Dr. Cheung Yat Kin. Dayo Wong (黃子華) also generated buzz with his comeback role in My Prime Lady. The 53-year-old comedian has always served as a ratings-guarantee and will likely achieve the same in his brand new series.

Despite media buzz about Linda Chung (鍾嘉欣) as this year’s TV Queen, many viewers seem uncertain about their Best Actress picks and are instead cheering for popular Supporting Actress candidates Nancy Wu (胡定欣), Mandy Wong (黃智雯), and Elena Kong (江美儀).

When asked to comment about this year’s epic TV King battle, Kenneth Ma agrees that he will be facing many strong opponents and is not at all confident about his own chances. “[The Hippocratic Crush 2] is a sequel after all. My performance was affected by the restrictions already in place in the original series. It probably won’t generate as much noise. Of course, I hope for satisfactory ratings. I honestly do not dare to even think about becoming TV King. Winning it would of course make me very happy, and if I don’t win I will just work even harder. This year’s opponents are very strong… I don’t think I stand a chance [against them], but I really want to thank everyone for thinking highly of me and calling me a dark horse candidate. Hearing this, I am already very happy!”

Even though three-time TV King Wayne Lai (黎耀祥) received criticism for this year’s Bullet Brain <神探高倫布>, some believe that he can change the tide with Will Power. When asked to comment, Wayne hopes that viewers will enjoy Will Power and shared that he will face this year’s race with a calm, normal mindset. “Of course I want to win, but I will not consciously dwell on the subject. Honestly, Bullet Brain‘s failure was a good lesson. At the very least I have learned a lot from this experience. My worst fear is that nobody pays attention to my series… I would only know what to improve on when someone praises or criticizes me. There are actually many great series this year. If it were up to me, I would pick Francis Ng as TV King. He is a great actor so nobody would oppose at all.”