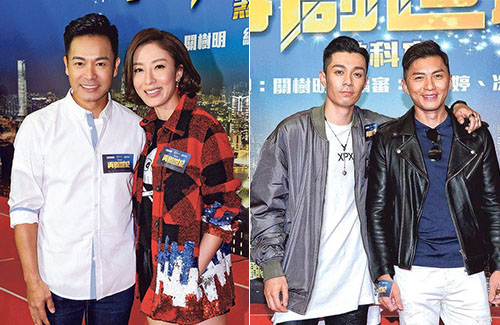 Filming for the TVB drama Another Era <再創世紀> has finally wrapped up, ending six months of principle photography. To celebrate the occasion, the cast and crew of the show held a celebratory dinner a few nights ago, sharing their filming experiences with the press.

Another Era is a sister production to TVB’s 1999 epic At the Threshold of an Era <創世紀>, and stars Roger Kwok (郭晉安), Frankie Lam (林文龍), Tavia Yeung (楊怡), Niki Chow (周麗淇), Pakho Chau (周柏豪), Benjamin Yuen (袁偉豪), and a special appearance by Linda Chung (鍾嘉欣). Another Era is Tavia’s comeback drama with TVB since ending her management relationship with the company back in April 2016. Expressing her excitement that Another Era has completed filming, Tavia said she is prepared to rest and celebrate the upcoming Christmas holiday. Asking if she would be using this opportunity to “make a baby”, Tavia humorously said, “I’ve been ready, but since I’ve been working nonstop for four months, I need to rest and recuperate. I’m so sleepy. I need to sleep.”

Tavia thanked her friends and colleagues for looking after, saying that she will be looking into their food and traditional Chinese medicine recommendations. Asking if her husband, Him Law (羅仲謙), was accommodating, she said, “Why wouldn’t he? I’ve been busier than him. His schedule was altered so that’s why he had some free time. He’s been very good. He would always wake up in time to drive me to my early schedules at 4 in the morning. He deserves some praise in front of you guys!”

Working with Tavia for the second time, Roger said Tavia is pushing him to get plastic surgery. “It’s because it’s always a great time working with her,” explained Roger. “I’m always laughing. The more I laugh, the more wrinkles I get. My mouth has gotten bigger. I need to have a chat with my plastic surgeon tomorrow.”

Roger also added that he hasn’t had that much fun filming a drama before. “The conversations we had were endless. Perhaps this is what it feels to be compatible.” Roger won’t be filming any dramas at the meantime, but plan to get back to work at the end of next year. “I plan to take some singing lessons. I’m not trying to debut in the music industry again, but it’s just for my own personal enrichment.”

Since signing with TVB, Pakho said his most unforgettable experience so far was working with Benjamin. The bromantic friends had also collaborated in Line Walker: The Prelude <使徒行者2>, which recently completed its broadcast.

“I’ve been seeing Benjamin Yuen more than I’ve been seeing my own parents,” said Pakho. “I literally see him four to five days a week. He’s really family now, like my older brother.”

7 comments to “Another Era” Completes Filming, Tavia Yeung too Sleepy to Make Babies