After nearly a decade of dominating charts, the ancient Chinese fantasy genre is still proven to be lucrative, and is here to stay for a while.

Fantasy romance web drama series Love and Redemption <琉璃> has been topping viewership charts since its premiere on August 6, 2020. According to Youku, where it has been trending, it is the number one most-watched period drama for the week. On Douban, Love and Redemption is the most-searched drama series, peaking at 9899. It also topped popularity lists on Douban, Weibo, Guduo, and VLinkage. 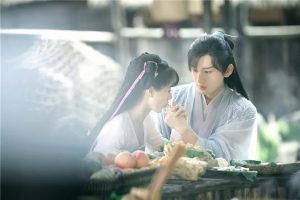 Love and Redemption is produced by the same studios that adapted Swords of Legends <古剑奇谭> and Noble Aspirations <青云志> into TV. It is based on the novel Liu Li Mei Ren Sha <琉璃美人煞> by Shisi Lang (十四郎). Along with Hua Qiangu <花千骨> and San Sheng San Shi, Shi Li Tao Hua <三生三世十里桃花>, Liu Li is regarded as one of the “Big Three Xianxia Female Classics”.

Following the blueprint of the classic Chinese text Classic of Mountains and Seas <山海经>, Love and Redemption follows the inept and unmindful Chu Xuanji, youngest daughter the Shaoyang Sect leader, who finds personal growth in her journey as she overcomes the struggles following her expulsion from the academy. Meanwhile her classmate Yu Sifeng is cursed to hide his identity with a mask. The curse can only be broken if he finds true love.

Unlike many new age fantasy dramas that have been populating Chinese TV in recent years, Love and Redemption follows a more traditional format that closely follows traditional Chinese culture and myths.

Poetic Oriental Beauty, a traditional Chinese style photography service, has recently purchased the rights of the series to reproduce various costumes and characters for their service. Poetic Oriental Beauty also has the rights for Story of Yanxi Palace <延禧攻略>, Eternal Love <三生三世十里桃花>, The Legend of Dugu <独孤天下>, Legend of Fuyao <扶摇>, The Story of Minglan <知否知否应是绿肥红瘦>, and many other popular ancient Chinese drama series.