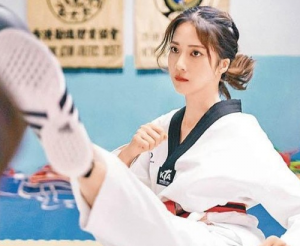 In a contrast from her previous genteel and sweet characters onscreen, Hera will portray a policewoman in the breakthrough role. Highly promoted by the station since winning Miss Hong Kong 2018 pageant, the 27-year-old has been praised for making improvements since starring in Battle of The Seven Sisters <七公主>, and will also appear in upcoming heavyweight drama The Beauty of War <美麗戰場>.

As Alien Space Sensor intercepts different spatial dimensions, Hera will portray two distinct characters – a policewoman in the “now”, and a girl who has experienced many hardships in the “future”, hence giving the actress a bigger acting challenge.

Asked if she is feeling stressed, she said, “Didn’t really think about (the) pressure, because the chance is so hard to come by, so right now I’ve been focused on preparations, I will do my best and (listen to) to recommendations from the company and producer!”

Having suffered a torn ligament previously, Hera revealed that she had not been able to exercise properly in about half a year, and was keen to get into shape for the physically demanding role. “Now is a chance for me to regain my fitness, I hope to do my best!” Already obtaining a black belt in Taekwondo last year, the actress has continued training to perfect her punches, kicks and gun-wielding poses in preparations for the anticipated role.