Touted as one of TVB’s newly promoted Millennial Five Tigers, Joey Law (羅天宇) is currently filming for the new reboot of Return of the Cuckoo <十月初五的月光>.  While filming a car accident scene, he positioned himself incorrectly after the supposed collision, and suffered injuries to his head and neck.

Admitting to having little experience in filming action scenes, Joey did not know how to angle himself correctly. “The filming crew did all the preparation work very thoroughly and set up the crash mat for me. However, I did not know how to readjust my position and overexerted myself. I was too careless and sprained my neck as I was falling, but [I thought] it wasn’t serious, so we continued filming. 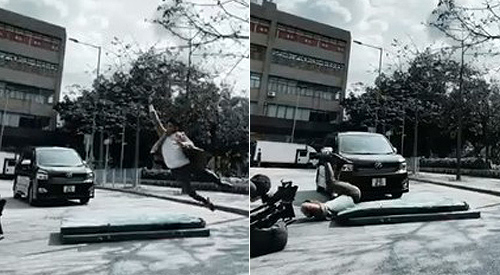 The next day, Joey felt the pain. “I went to get acupuncture done and also saw a physical therapist. I will learn from this experience, and will probably look for a professional stuntman to teach me some things.”

Joey was not the only one who has suffered from injuries while filming Return of the Cuckoo. His costar, Judy Kwong (鄺潔楹), was also involved in a scene where an extra actor was injured while filming. Bearing a prop knife, the extra actor turned around and accidentally hit the camera, causing his eyebrows to bleed. Recalling the incident, Judy said, “We rehearsed the scene a few times and have prepared our positions in advance. I don’t know why or when the camera actually started rolling–the positions of the camera and the extra actor were wrong. The extra actor bled profusely, and we couldn’t stop the bleeding with napkins. We had to find a replacement to continue filming. Hopefully he will recover quickly!”