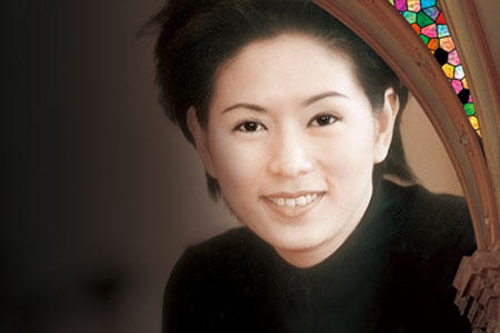 Jacqueline’s husband, 62-year-old Singapore Exchange Securities Director, Lau Chi Man (劉志敏), stated, “She will no longer endure any pain after leaving this world.” Marrying in 2008, Jacqueline was shortly diagnosed with pancreatic cancer in 2010.

On June 30th, Jacqueline Law’s elder sister sent a message to the media, stating, “My sister, Jacqueline Law, has passed away peacefully in Singapore at 4:53 AM this morning.” At a press conference, her stepson also confirmed Jacqueline’s death, while attempting to hold in his tears. He said that the family was preparing for the funeral and that he would not reveal any related details because of his father’s (Jacqueline’s husband) will.

It was rumoured that Jacqueline’s funeral is scheduled to take place on July 4th following Christian traditions and her body will be subsequently cremated. A memorial service will reportedly be held by her husband in Hong Kong on July 12th. Jacqueline’s acting career started when she starred in television drama, The Book and the Sword <書劍恩仇錄> in the 1980s. In 1999, she lost hearing ability in her right ear after a diving accident. Her father declared bankruptcy and she suffered from depression between 2000 and 2004.

In 2010, she was diagnosed with cancer. Despite being seriously ill, she still continued her DVD production chronicling her journey of battling cancer in February. In April, three months before her death, she attended her stepson’s wedding banquet, while accompanied by her husband and mother-in-law.

Jacqueline was once in a three-year relationship with Stephen Chow (周星馳). The pair fell in love after filming 1989’s The Final Combat <蓋世豪俠>, which propelled Stephen to stardom. The relationship reportedly ended because of Stephen’s mother’s objection.

In February this year, Jacqueline held a farewell ceremony in Hong Kong, where she invited more than 20 close friends and relatives to attend. She expressed her post-death wishes to each of her close friends. Jacqueline’s family has a history of cancer, which took away the lives of her father and her husband’s ex-wife.

Upon learning about Jacqueline’s death, Macau singer, Louie Castro (賈思樂) mourned, “Jacqueline always had a wish to be permanently with God. It is good that she can now do that. I hope she will have peace of mind in her afterlife. Jacqueline did not have any unfulfilled wishes. She only wanted to see her close friends more often in her last days.”

Louie denied rumours claiming that Jacqueline’s weight dropped to 80 pounds a month ago. “Although she appears to be a little bit tired, she was still very pretty and cheerful. We talked about a lot of happy things.”

Leon Lai (黎明) costarred with Jacqueline in TVB drama, The Challenge of Life <人在邊緣> 22 years ago. Leon said, “I feel very unhappy about her death. Birth, aging, illness, and death are inevitable in life. I only hope that she has a good afterlife and her family will be strong and live happily in the future.”

On the day after Jacqueline’s death, reporters were unable to reach her close friends, Monica Chan (陳法蓉), Kitty Lai (黎美嫻), Sheren Tang (鄧萃雯), and Annie Liu (廖安麗). All of them were said to be on their way to Singapore to attend Jacqueline’s funeral.