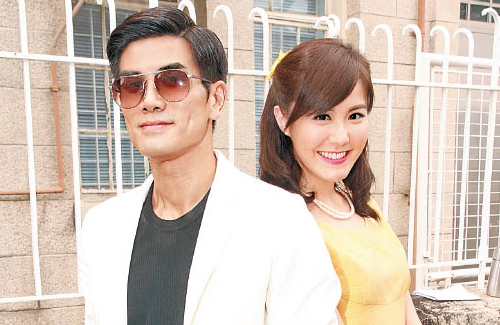 In fact, Philip and Moon were said to have been cozying up to each other even before the filming of Hero Within The City began. When asked if filming intimate scenes were awkward for them, Moon replied, “They’re just rumors, nothing special. They’re not real – there’s absolutely no need to avoid each other and take it to heart.”

Moon added, “Not only are Ruco Chan (陳展鵬) and Philip trained in marital arts, but I’m a pretty good fighter too! There will be a lot of strange but interesting things about my character – it’ll be different than typical wealthy girl roles.” Asked if she prefers men who are skilled fighters, Moon said, “Good fighting skills are not the only thing that attracts a girl – making a girl feel safe is more attractive in comparison.”

Known for his action and martial arts films, Philip revealed that he went through an extreme diet for his role. Although he has always been very fit, Philip explained why he underwent a harsh fitness routine. “I have to take my shirt off. Because I have to do that many times in the series, I have to maintain my figure and can’t eat that much. It was hard work – I had to train hard and eat little. For now, I still have my six-pack abs.”