In the drama, Song Ji Hyo stars as Jo Hee Ra, a magical witch who grants wishes to customers. The audience soon realize that the wishes come with a big price, when a man loses his eyesight after his wish to win the lottery was granted.

In the first episode, the audience meets Jeong Jin (Nam Ji Hyun) and her wishes for revenge against the swindler that stole her mother’s money. Jeong Jin’s wishes came true, and the swindler died later that night. However, Jo Hee Ra did not immediately take her payment and takes over Jeong Jin’s restaurant with the warning, “You wanted revenge, and you will now bear the consequences of your wish.”

While Jeong Jin deals with the gravity of her situation, Lee Gil Yong (Chae Jong Hyeop), a high school student suffering from bullying, arrives at the restaurant to have his wish granted. Lee Gil Yong’s wish and the price he paid is not yet revealed, but Hee Ra offered him to work part-time in the restaurant.

After watching the premiere, viewers praised Song Ji Hyo for excelling in a role that is very different from her past works. Since Song Ji Hyo is known to play characters with a good image in rom com dramas such as Emergency Couple, Lovely Horribly and Was it Love, many  complimented the actress’ drastic transformation to a cold yet captivating witch.

As the story further unfolds, viewers are interested in finding more about the witch’s history and the prices that will be paid by the restaurant’s patrons. 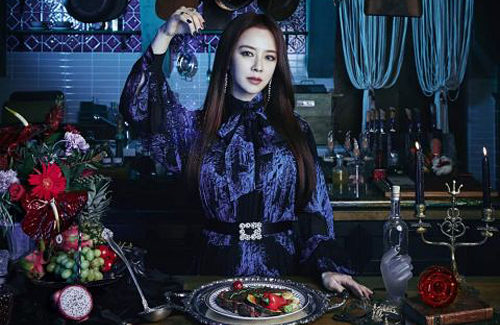 “The Witch’s Diner” revolves around a mysterious restaurant that grants wishes in exchange for customers’ souls.