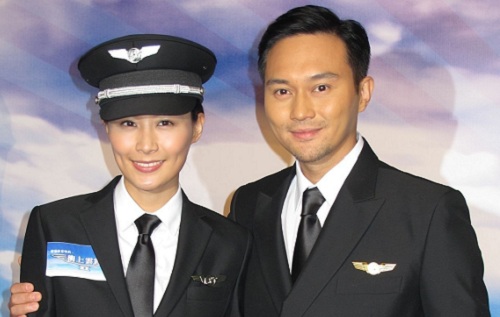 Also in attendance at the blessing ceremony were the high executives from TVB and Hong Kong Airlines, the drama’s main sponsor. Principal photography will begin at the end of July in Hong Kong, before moving to London, Paris, Taiwan, and Hainan Island in four months’ time.

Portraying a handsome and flirty pilot, Chilam Cheung expressed his excitement to start filming Triumph in the Skies 2. He joked, “I have many girlfriends in the drama! I’ve already discussed it with the producers, and they say they will invite many famous beautiful models to help me out!” When asked if the producers considered inviting Chilam’s beautiful wife, Anita Yuen (袁詠儀), Chilam said Anita is currently at work overseas, so he had to seek his friends to help out instead. He later added, “My wife is the hottest, though!”

Ron Ng, who has recently broken up with Viann Zhang (張馨予), was absent at the blessing ceremony. When asked about his absence, Myolie Wu, who will portray Ron’s girlfriend in Triumph in the Skies 2, joked, “Maybe he’s really hurt (from heartbreak)! A man should be able to face it and let it go. Let me give him some warmth in the drama!” Recently, Kenneth Ma was reported to have rekindled his relationship with Margie Tsang (曾華倩), who is 9 years his senior. Kenneth denied the claims and expressed that he is treating the reports as promotion. He said, “Ms. Tsang is refreshing and very bright. Being friends with her is great, but I haven’t hung out with her for many years already. I don’t want there to be any more misunderstandings.”

Francis Ng revealed that he will share many scenes with new cast member Toby Leung (梁靖琪), who will portray his goddaughter. He joked, “Since she is producer Tommy Leung’s (梁家樹) daughter and married, I will stay away from her!” He also said that since the drama will have many stewardesses, he will be more discreet to prevent making headlines.

14 comments to “Triumph in the Skies 2” Holds Blessing Ceremony