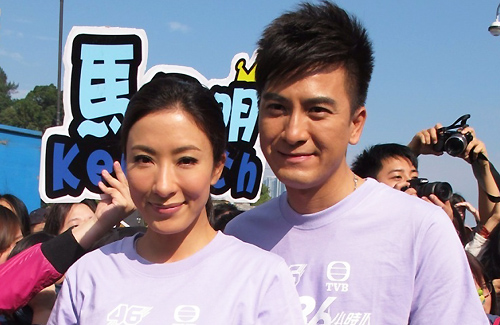 With the upcoming TVB Anniversary Awards ceremony in December, momentum is building up regarding which artists will be the TV Queen and TV King this year. At the latest promotion for The Hippocratic Crush 2 <On Call 36小时>, the cast made an appearance in a floating parade, and gave out presents to the large crowd in Tsim Sha Tsui. Kenneth Ma (馬國明), Tavia Yeung (楊怡) and Him Law (羅仲謙) pulled votes for themselves for the Anniversary awards.

Kenneth was once again, teased by reporters for his five-second stunned look when it was announced that he was voted as Best Actor by his peers at the 2013 TVB Anniversary Gala last week. Kenneth also possessed the same shocked expression last year when Wayne Lai (黎耀祥) won TV King instead of Raymond Lam (林峯). Kenneth promised that he will remain more composed at the upcoming Anniversary awards.

Even though his confidence is given an extra boost from his colleague’s votes, Kenneth will not stress over the results at the official awards ceremony. To prove his point, he also did not prepare any speech. He added, “No need to prepare anything special because words from the heart just flow out naturally.”

With regards to complaints that his screen-time in The Hippocratic Crush 2 is too little, Kenneth assured his fans that he would be appearing more in future episodes.

During Meini Cheung’s (张美妮) wedding last week, good friend, Tavia and rumored boyfriend, Him, were teased on stage. Him magnanimously said, “Everyone is only joking. It’s okay. Can consider it as a gift for the newlyweds.” When the topic is veered towards the couple’s marriage, both were however evasive.

Because of the flu, Tavia was not able to attend the Anniversary Gala held last week. Tavia said that she was really happy when she saw Kristal Tin (田蕊妮) voted by everyone to be this year’s TV Queen. She added, “I also think Linda Chung (钟嘉欣) has a good chance. This year everyone has great potential. Healthy competition is good.”