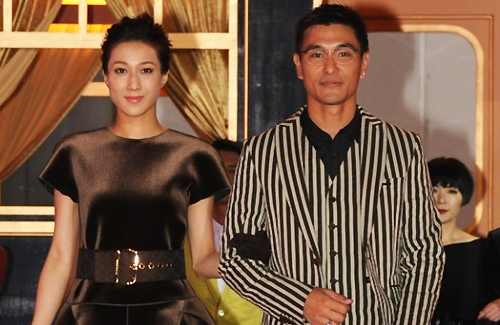 With nearly a thousand sponsors attending the event, the 2014 TVB Sales Presentation was held with tremendous success on November 7, 2013. The trailers of sixteen new television dramas were shown at the star-studded annual presentation. Twelve new variety shows and informative programs were introduced to the audience, which included the long-awaited 2014 Mr. Hong Kong competition, a male beauty pageant had been on hiatus in the last two years.

TVB Will Focus on Comedies

Next year, TVB announced that they will focus on producing light-hearted comedies and other productions that will focus on the current issues of modern Hong Kong society. Franklin Wong (黃華麒), producer of Below the Lion Rock <獅子山下>, an immensely popular RTHK soap opera about the lives of Hong Kong citizens, is confirmed to produce a television drama that will spawn 13 to 26 episodes for TVB.

Wong Cho Lam(王祖藍), who wrote and starred in 2013’s most critically successful drama Inbound Troubles <老表,你好嘢!>, will return to write an unrelated sequel Inbound Troubles 2, which is currently under the temporary title Cousin, You’re So Hea! <老表，你好Hea!>.

In addition, TVB also confirmed that award-winning actor Anthony Wong (黃秋生) will be returning to TVB next year to film the television drama, Kung Fu <功夫>.

Arm in arm, former couple Kevin Cheng (鄭嘉穎) and Charmaine Sheh (佘詩曼) entered the stage together. The former couple were arranged to stand next to each other, but were not seen interacting. However, Kevin later insisted that he had chatted with Charmaine backstage. Niki Chow(周麗淇), who had dated Kevin in the past, was seen chatting with Sammy Leung (森美) and dodged Kevin throughout the night.

On the other hand, current rumored couples like Ruco Chan (陳展鵬) withLinda Chung (鍾嘉欣), and Priscilla Wong (黃翠如) with Tony Hung (洪永城), did not show any awkward signs and happily complied with the media’s request of taking photos together. They were also seen chatting together on stage.

The 2014 TVB Sales Presentation will air on TVB’s Jade channel on November 30, 2013. The following are the sixteen new television dramas that were introduced at the event: