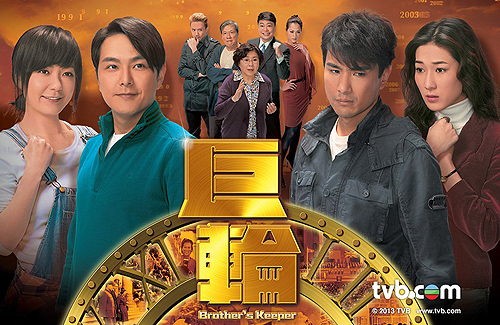 Two half-brothers, who were separated for years, meet again under improbable circumstances. Brother’s Keeper <巨輪> premiered on September 23 with a fast-paced plot in which Edwin Siu (蕭正楠) is kidnapped by his elder brother, Ruco Chan (陳展鵬). Although viewers groaned at the recycled plot of lost siblings in the first episode, it set the stage for the brothers’ conflict and offered a glimpse into Ruco’s fascinating character, who possesses questionable values despite being a former policeman.

The drama opens in present day, in which Law Wai Shun (Edwin Siu) has already become a wealthy businessman in Macau. However, he has not forgotten about his elder half-brother, Kiu Tin Sang (Ruco Chan) and hopes to find his whereabouts. One day, while dropping off Rachel Cheuk (Linda Chung 鍾嘉欣) at the airport, Wai Shun and Rachel were seized by kidnappers.

Through a series of flashbacks, the drama will unfold and tell the brothers’ life stories over the last two decades, while incorporating historical events such as Hong Kong’s touch base policy and Macau’s relaxed immigration and financial turmoil, as the key plot vehicles that drive the changing fates of the brothers and their families.

Wai Shun started from humble beginnings in Macau, but through hard work and perseverance, and with the help of Yiu Man Ying (Kristal Tin 田蕊妮) and wealthy heir Lung Fei (Louis Yuen 阮兆祥), Wai Shun made great strides in his career.

Producer’s Take on the Characters

Producer Amy Wong (王心慰) spoke of the characters, “Ruco’s character is both good and evil. In the beginning, he tried to bring his brother Edwin from Foshan to Hong Kong but unfortunately, only he could get the citizenship. Edwin had to follow his mother Louise to Macau. Edwin was envious that his brother, Ruco could study in Hong Kong and become a policeman and he had to be a hawker, selling sweets. But he has culinary talents. Through their struggles, the two brothers experienced various difficulties. Ruco’s journey through life was full of struggles, but he also has his own bottom line. Edwin’s life was relatively simple. Although he sometimes does not agree with Ruco’s work ethics, he managed to achieve success so he ended up being more fortunate than Ruco.”

Besides the two lead actors, the development of the other roles are also outstanding. The relationship shared by good friends, Kristal, Louis, and Edwin is particularly heartwarming. Kristal’s loyal, tomboyish role will have a love relationship with Edwin. Louis’ role provides the comic relief for the drama.

Linda Chung’s Rachel Cheuk is the eldest daughter of Lau Wai Kuen, the third wife of the wealthy Cheuk family. On the surface, she is a rich man’s daughter but in reality, she has no status at home and has to rely on her own hard work to change her fate.

Veteran actress Louise’s story in the show is also rather melodramatic. After meeting, Joseph Lee (李國麟), she gave birth to Ruco. But Joseph had no intention to marry her so she left for Foshan. Then she got to know Lau Kong (劉江) and gave birth to Edwin, giving rise to the intricate relationship between the three of them.