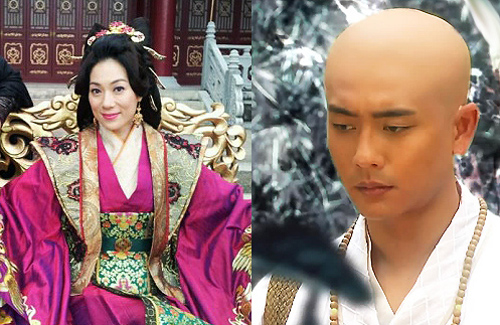 Note: This is an original JayneStars feature detailing the canceled series that TVB had conceived, but never filmed. Written by Addy.

In recent years, TVB has concentrated on producing modern dramas and released less wuxia and period historical dramas, due to these expensive and demanding productions. Despite intriguing period drama proposals presented at earlier sales presentations, TVB canceled these projects. Should TVB ever bring them back to life, it would not be a surprise to see them being successful either.

Li Keyong was a powerful jiedushi – another word for warlord – during the Chinese Five Dynasties and Ten Kingdoms Period, an era of political upheaval between the Tang and Song Dynasties. Li had twelve adoptive sons and one biological son, all who made major contributions to their father’s campaign against the usurper state, Later Liang. TVB’s Li Keyong and the Thirteen Treasures, presented at the Sales Presentation 2008 event, would have detailed Li’s controversial relationships with his thirteen sons.

Li’s thirteen sons, all whom carry their own special talents and valiant wits, start out as friendly competitors, but after Li appoints his youngest, Li Cunxiao, as commander of his army, the brothers’ rivalries become deadly and deceptive. Cunxiao later falls in favor and leads an army against his father, but is defeated, and executed. Li’s birth son, Li Cunxu, succeeds his father and becomes Emperor Zhuangzong of Later Tang.

Truthfully, The Thirteen Treasures is nothing new to the Hong Kong audience. Ni Kuang (倪匡) adapted the story into a novel, and the novel itself was put into film by the Shaw Brothers – The Heroic Ones – in 1970. TVB also adapted Ni Kuang’s novel into a television drama in 1983, titled The Wild Bunch <十三太保>, and it starred Felix Wong (黃日華), Idy Chan (陳玉蓮), and Kent Tong (湯鎮業).

TVB’s updated Li Keyong and the Thirteen Treasures is exciting because it would have been the perfect chance to promote new male stars to the already dwindling Hong Kong television industry. If the drama really happened – and it became a success – the careers of Joel, Stefan, and Francois would have been very different. But maybe thirteen male leads were just too much to handle for TVB.

Contrary to popular belief, Hu Xueyan’s Lady Chef was meant to be more of a political thriller than a drama about cooking. The story would have taken place in the Qing Dynasty, following the years after the Taiping Rebellion. Hangzhou’s Hu Xueyan is a resourceful merchant who used the wars to benefit his business, and also aided the Qing government in their military supplies. Xueyan increases to a third-ranking official after only one year of service, becoming the envy among his peers.

Due to their contradicting personalities, Xueyan and his family’s chef, Dau Neung, initially do not get along, however, through Dau Neung’s quick-thinking and sharp senses, Xueyan is able to defeat the government officials who come to him with intentions of harm. Although primarily planned to be a political drama, Hu Xueyan’s Lady Chef would also add elements of gourmet and cooking.

Hu Xueyan’s Lady Chef was presented at the Sales Presentation 2008. The teaser trailer starred Bobby Au Yeung (歐陽震華) as Hu Xueyan, Charmaine Sheh (佘詩曼) as Dau Neung, Joyce Tang (滕麗名) as Hu’s wife, Wayne Lai (黎耀祥) as the main villain, and Kwok Fung (郭鋒) as a government official. Maybe the plot of Hu Xueyan’s Lady Chef was too redundant, but TVB never gave Hu Xueyan’s Lady Chef the green light. This drama, as well as Li Keyong and the Thirteen Treasures, were the only two proposed dramas for 2008 that never made it into production.

The Monk, presented at TVB’s Sales Presentation 2010 event in November 2009, garnered only a few supporters. Most of the criticism was directed at Bosco Wong (黃宗澤) who, at the time, was claimed to be not yet ready to lead a drama on his own. Bosco starred as the titular monk in the teaser trailer, and his lead role was supported by Michael Tse, Kate Tsui (徐子珊), Sunny Chan (陳錦鴻), and Lau Siu Ming (劉兆銘).

Surrounding the philosophy of Buddhism, The Monk would not have been entirely dedicated to Bosco’s character.The Monk also reflected on political confusion and corruption, set against the stormy period of the Six Dynasties. Sunny plays a prince who not only killed his father for the throne, but also took his father’s wife (Kate) as his wife. The prince’s brother (Michael) has an affair with his wife and, harboring hatred for his brother, revolts against him. These characters commit the three poisons of Buddhism – desire, hatred, and ignorance. The powerful Monk Mokit (Bosco), after years of training from a master (Lau Siu Ming), leaves his mountain of wisdom to warn them of their sins and stop the preceding coup.

In what appears to be a precedent of Inbound Troubles <老表，你好嘢>, Lo Lan was planned to be series that commented on the diversity of modern-day Chinese society.  It is a story about Sin, a well-educated Hong Kong youth who strives for an accomplished life. She rooms with Qiao, a model from Shanghai, and You, a fashion designer from Taiwan. Growing up under different lifestyles and cultures, the three girls often clashed. Through its depiction of the three roommates, the series may have had the chance to provide a further critique on the contradicting aspects of Hong Kong, Chinese, and Taiwanese culture. Would viewers have preferred the more serious Lo Lan, Si Lam, Tsui Ka Wai or the more comedic Inbound Troubles?

Legend of the Hawk and Wolf <鷹狼傳奇>

The name may sound like a wuxia epic, but Legend of the Hawk and Wolf was initially planned to be a modern drama with a background that explores inner beauty.  A pair of physically unattractive but heartwarming and endearing parents give birth to a beautiful baby boy, who grow up to be a famous idol singer. Under the pressure of society, the boy hesitates to acknowledge his parents to the media.

Legend of the Hawk and Wolf was never given the teaser trailer treatment, but the production was mentioned at the TVB Sales Presentation 2010 event booklet. The proposed cast was Kevin Cheng (鄭嘉穎), Tavia Yeung (楊怡), Chung King Fai (鍾景輝), and Michelle Yim (米雪).

It was of absolutely no surprise that Legend of the Hawk and Wolf never made it to the final production cut. The idea of inner beauty conquering exterior appearances has been a recurring theme in media for many years, and TVB has made dramas about this before. Nonetheless, the casting of The Eagle Wolf Legend is worth a gander, and the title itself speaks that the drama would not have been about just beauty.

The Mole is exactly what you thought it would be about – undercover agents. Imagine it being Infernal Affairs <無間道> meeting Rosy Business 3: No Reserve <巾幗梟雄之諜血長天>: set against the vicious chaos of the Second Sino-Japanese War, The Mole intended to tell a thrilling story about a trio of highly trained female secret agents sent out by the Chinese government to destroy the Japanese military from the inside. But there is one daunting problem – one of these agents is a mole for the Japanese.

Lee Siu Yuet is a secretary for a Japanese-based business, and is able to give first-hand information to the Chinese government. Lam Man Lai is a courtesan, thus having to seduce her way in to obtain military secrets. Cheung Man Kuen is a sales associate, and has close relations with business magnates from France, England, Italy, and Japan. All striving to protect their own identity, the three agents wage a battle of wits against each other, and in the end, only one woman would be left standing.

The Mole was included in TVB’s Sales Presentation 2011 booklet, and the cast consisted of Michael Tse, Roger Kwok (郭晉安), Sonija Kwok (郭羨妮), Bernice Liu (廖碧兒), Shirley Yeung (楊思琦), Susan Tse (謝雪心) and Ngo Ka Nin (敖嘉年). Needless to say, the cast does not sound quite right for the war epic; neither is the story of The Mole very unique, but if everything was done right, The Mole may turn out to be something mind-blowing, memorable, and worth-watching.

Legend of Empress Lu <呂后傳> and Lu for King <呂氏為王>

It was an interesting turn of events when TVB announced that they would produce two dramas on Han Dynasty’s Empress Lu Zhi for their 2012 television season. Legend of Empress Lu, which would have starred Kevin Cheng, Maggie Cheung Ho Yee (張可頤), Kristal Tin (田蕊妮), Kenny Wong (黃德斌), and Oscar Leung (梁烈唯), was under the camp of Catherine Tsang (曾勵珍), while Lu for King, which was tagged with a cast starring Bosco Wong, Tavia Yeung (楊怡), Eddie Cheung (張兆輝), Sharon Chan (陳敏之), Ben Wong (黃智賢), and Mandy Wong (黃智雯), was under the supervision of Tommy Leung (梁家樹).

Indeed, having two dramas with similar premises would be quite repetitious and excessive, but both productions present the same source material in very different ways. Catherine Tsang’s Legend of Empress Lu appeared to place a stronger emphasis on Lu’s historical achievements, while Tommy Leung’s Lu for King had more passionate vigor.

Lee Tim Sing (李添勝) was attached to produce the Legend of Empress Lu project in early 2011, and the producer himself admitted that it was he who suggested to Catherine Tsang to shoot a television drama on Empress Lu. As for Lu for King, Tommy Leung’s camp revealed that their drama had been in development hell for several years, which was largely due to troubles in casting.

Nevertheless, TVB executives ultimately pulled the plug on both Legend of Empress Lu and Lu for King. Teaser trailers were filmed, but the dramas never made it to the 2012 Sales Presentation.

Rumors behind the axe said TVB did not want their own productions to compete against each other. A more plausible rumor alleged that TVB failed to round up a competent cast – Gallen Lo (羅嘉良) was offered a starring role in Lu for King, but he turned it down. Maggie Cheung subsequently left TVB after her contract ended in late 2011.