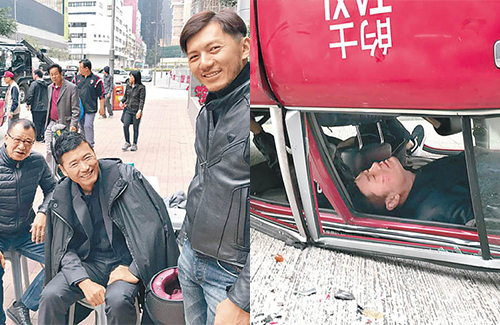 Michael Miu (苗僑偉) declined the help of a stunt double when he and costar Hui Shiu-hung (許紹雄) shot a car chase scene for the Shaw Brothers web drama The Protector <守護神>. The scene being filmed was about Micheal’s car toppling over after getting hit, and he falls to the ground unconscious. It was the drama’s last scene before wrap-up.

His wife Jaime Chik (戚美珍), his Line Walker: The Prelude <使徒行者2> costar Benjamin Yuen (袁偉豪), and The Protector producer Virginia Lok (樂易玲) were on set to visit the drama’s final scene being filmed. After ending the scene, the director announced that the show has wrapped up, and Michael popped a champagne bottle for celebration.

Asking Michael if he felt he had put himself in danger for the scene, the veteran actor said, “What is there to be scared? There is danger to driving, period.”

Michael, who won TV King at TVB Star Awards Malaysia for his performance in Line Walker: The Prelude, added that he felt fine after filming the shoot, saying, “The worst thing was probably getting dizzy from the car rolling all over the place.”

Ben, who was there to visit Michael on set, said he is currently on a break and will resume work in March or April to start a new drama. He has been spending time with his girlfriend Bowie Cheung (張寶兒), and the couple attended an magician’s event together a few days ago. Asking if he has learned magic for his girlfriend, Ben laughed and said, “I may not be good with [magic], but that doesn’t mean I can’t do other things. I’m pretty family-oriented. I know how to cook and brew coffee.”

Ben added that he’s been feeling much more confident and comfortable with himself, and his private life has changed for the better. “Whether it’s my career or my relationships, everything has changed. I used to be a little fresh meat, but now I’m half-cooked meat. (Do you have any wishes for the new year?) I hope to be able to purchase my own property within the year. Bowie has an interest in real estate investments, but I only know about cars. I need to consult her.”

Asking Ben if he would be adding her name if he ever purchases a new home, he said, “Let’s see how much I buy. Preferably one level for my mother, one level for her, and one for me. Let’s see what the future holds.”