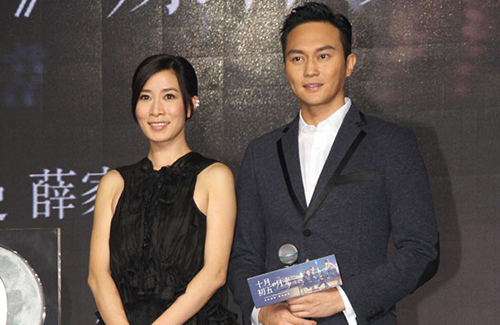 The cast of romance film Return of the Cuckoo <十月初五的月光>, including Chilam Cheung (張智霖) and Charmaine Sheh (佘詩曼), attended a press conference for the film in Beijing. The movie, directed by Patrick Kong (葉念琛), is a sequel of the 2000 TVB drama hit Return of the Cuckoo, taking place 15 years after the original TV series.

The movie brings back most of the original cast members, including Chilam, Charmaine, Nancy Sit (薛家燕), and Michael Tong (唐文龍). It also introduces a new character, portrayed by Joe Chen (陳喬恩).

At the press conference, Chilam and Charmaine shared that they initially did not want to film the sequel. Charmaine said, “I was in a mix of emotions when I first received the film offer. I was worried that my performance would not live up to the original television drama, but I decided to film it after reading the script. The story is very touching.”

Charmaine added that the original television drama, which is currently rebroadcasting on TVB Jade, has been receiving good reviews and ratings. “Because of this, I feel confident in the box office,” she said. On her thoughts about Joe Chen’s addition to the cast, Charmaine said, “She’s a great addition!”

Chilam shared the same sentiments as Charmaine. He said, “I was about to reject the film as well. It’s been 15 years after the television drama after all, and I was worried that there wouldn’t be enough material to continue the story. But the script touched me in the end!”

In the movie, there will be a love triangle between Charmaine, Chilam, and Joe. How does it feel to be the loved by two women? Chilam said, “It feels great! Joe Chen is a fantastic partner. Her acting sucks you in!”

The movie Return of the Cuckoo will be opening in Hong Kong on November 12, and Mainland China on November 20.