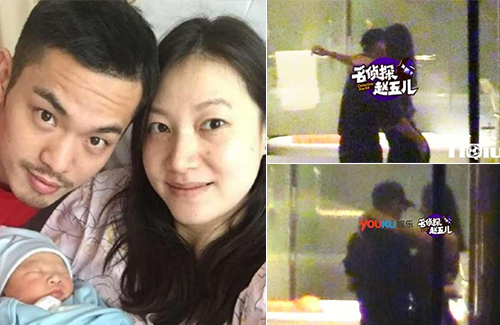 Chinese badminton world champion Lin Dan (林丹) shocked the nation after admitting to having an affair while his wife, badminton player Xie Xingfang (谢杏芳), was pregnant. Xie Xingfang gave birth to their son on November 5, 2016. The badminton couple dated for seven years before tying the knot in 2010.

Outrage broke out on China’s social media circle earlier this week when pictures of 33-year-old Lin Dan and a “mystery woman” surfaced online. The photos, which came from a clip shot by paparazzi, showed Lin Dan and the woman embracing each other by the window of their hotel room. Lin Dan touched her hips and the woman hugged his neck and shoulders. The video was reportedly shot last month in Guangzhou, when Lin Dan was participating in a badminton game. The mystery woman is speculated to be Chinese supermodel Zhao Yaqi (赵雅淇), who has competed in several beauty pageants over the years. Netizens went through Zhao Yaqi’s Sina Weibo account, and noticed that she had uploaded a picture of a badminton game on October 11, which matched the location.

The affair shook the entertainment industry. Many of Lin Dan’s friends in the circle have expressed their horror and surprise. Lin Dan lost a few sponsors and endorsers after the news broke.

After a day of silence, Lin Dan finally admitted to his infidelity on November 17, with a brief statement he posted on Weibo. He said, “As a man, I will not make any excuses for myself, but my actions have hurt my family. I want to use this opportunity here to apologize to them.”

Xie Xingfang Knew About His Affair

Reports say Lin Dan and Zhao Yaqi have been together for over half a year. In September, Lin Dan was photographed eating lunch with a mysterious woman. Some of the photographs included the woman linking arms with the badminton player. It was later reported that Lin Dan took the woman back home, and stayed with her for a while.

According to several reports, Xie Xingfang knew about Lin Dan’s affair, but kept quiet about it, and stayed as his wife only by name. There were also rumors claiming that Xie Xingfang had always been a very overbearing wife.

However, Xie Xingfang put these speculations to rest on Friday, when she published her own statement on the account. She wrote on social media, “Our family will support a man who shoulders, learns, and changes from his mistakes. Thank you to friends and fans for your concerns. This family will sail together through the storm.”