The comedy-mystery buddy film gets even more suspenseful. 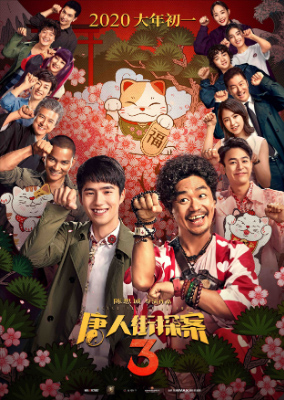 With Tang Ren (portrayed by Wang Baoqiang) and Qin Feng (portrayed by Liu Haoran) tackling more cases, the mystery of Q’s true identity thickens. A powerful character whose identity is not revealed, the character Q is a major point of suspense in the Detective Chinatown series, and has topped the “Crimaster World-famous Detectives” rankings, inviting countless guesses from viewers. The line “Whoever appears before me first, that person is Q” hints at every character who appeared being a possible candidate for Q, only keeps viewers guessing.

Following the conclusion of the second case “Rose’s Name” of the web drama version, Roy Chiu’s (邱澤) character Lin Mo recalls how Janine Chang’s (張鈞甯) character Ivy’s smiling face tattoo evolves into the letter Q, leading viewers to guess if Ivy is Q. However, many netizens believe this is meant to mislead. Many of the web drama’s leads will also appear in the film.

In the trailer, Wang Baoqiang, Liu Haoran, Masami Nagasawa and Tony Jaa’s characters collaborate to solve crimes, but also prepare to face off and compete against one another in a duel of the detectives. Each of the three rounds of challenges set by Q to fully test the four famed detectives’ abilities also end up in hilarity. Wang Baoqiang chooses to fight “Little White Leg” but ends up fending off a sumo warrior, while martial arts expert Tony Jaa who can supposedly take on 10 opponents at once calls out for the ambulance desperately, in scenes showcasing the successful film franchise’s signature brand of humor.

“Old Qin, You Killed Someone?”

In the trailer, Tang Ren is shocked to realize that his longtime buddy Qin Feng has been handcuffed and thrown into jail. As Qin Feng had earlier expressed his wish to complete the perfect crime in the first installment, this plot development leaves fans curious as to whether he has made the choice as he wanted to.

Up against the terms set by the mysterious character, Qin Feng is forced to make life-or-death decisions. His utterance of how “justice necessitates sacrifice” leaves viewers worrying about his fate. Tang Ren’s forlorn gaze at seeing his companion Qin Feng being led away also adds to the story’s suspense as the detective pair face the threat of separation for the first time.