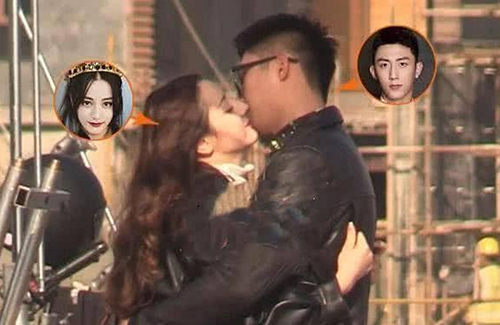 Rumors have been flying that the two stars have been very flirtatious with one another and have a budding relationship. Paparazzi shots of them filming their kiss scene for the drama have also been leaked.

In another instance, Johnny was allegedly kneeling on the ground playing with a stray cat and Dilireba was chatting with a staff member. After the cat ran away, Johnny tapped Dilireba’s shoulder and the two of them entered a car and emerged after a long period of time. This is not a one-time occurrence as Johnny would frequently spend time in Dilireba’s car after filming and they were witnessed heading over to his apartment one night.

After the news was released, both parties’ fans vehemently denied the claims and started arguing with each other. Johnny’s fans claimed that Dilireba was using him for media exposure and Dilireba’s fans claimed that he is not worthy of their goddess since he has been involved in a domestic violence dispute before. Johnny was previously rumored to be married and to have physically abused his partner and cheated with actress Zhang Yishang (张艺上).

Other netizens were more level-headed and said that since neither are dating or married, it is very normal for them to be together.

Dilireba Once Lived in Hotels for 9 Years

Dilireba’s Life Behind the Camera isn’t So Glamorous