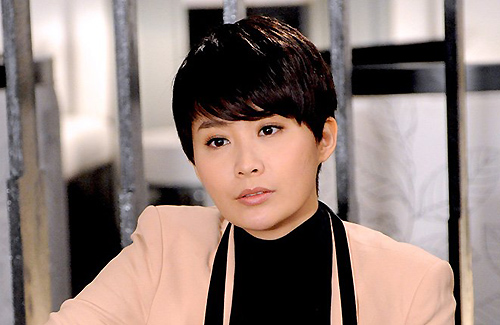 When looking through her schedule, Fala Chen (陳法拉) realized that she has never had a day that was not planned. Even on a day of vacation, Fala would have that day’s events marked to the hour. But something different has happened this year – unwritten days.

“Every single day, I would be working, working, and working. I did not have much of my own time. That got me overlooking many things.”

The Szechuan-born beauty left for the United States when she was 14 years old, and after winning a series of Chinese American beauty pageants, she was sent to Hong Kong to compete for TVB’s Miss Chinese International pageant, and won first runner-up in 2005. A year later, Fala made her debut acting performance in 2006’s Forensic Heroes <法證先鋒>. In 2006, she filmed a total of five television dramas back-to-back. In 2007, she won Best Supporting Actress for her villainous role in the dancing drama, Steps <舞動全城>. In 2010, she won her second Best Supporting Actress, for her tragic role in the critically acclaimed No Regrets <巾幗梟雄之義海豪情>.

Fala never stopped working in the seven years she was with TVB, but earlier this year, Fala made a surprise announcement, confirming that she would not renew her management contract with TVB. Now, Fala is a free artist.

“I can now do many things, all of which I couldn’t do before, like traveling. I would get impromptu feelings to travel somewhere, and now I have the ability to just book a flight ticket right on the spot and go there. I feel very free,” said Fala. However, having too much freedom can be quite misguiding. For someone who has lived her life by the book, Fala has problems adapting to her new freelance lifestyle.

“Not only is this my first time portraying a lawyer, it is also my first time getting a short boycut for my hair. It’s very refreshing. As I had a lot of long dialogue in court rooms, [Eugene] was also a very challenging character to portray.”

Starring opposite award-winning actor Wayne Lai (黎耀祥), who also portrays a lawyer in the series, the challenge is even more stressful for Fala. “Not only is he a fantastic actor, he also has great memory, and that puts a lot of pressure on me. Sometimes we would be stuck in the same court scene for days. I’ve never experienced that before.”

Studying acting in the United States and starring in her first horror film with Gordon Lam (林家棟), what will Fala plan to do next? She does not know, but that just makes the future look more exciting.

“At this stage in my life, I am willing to try everything. Coming across a good character and a good script is even more important than time, money, and travels. This is a notion that I am grateful to have.”

27 comments to Fala Chen is Free

Song Joong Ki to Host MAMAs for the Fourth Time